Blog Tour: 1887 The Day They Turned Off the Water by A.E. Wasserman 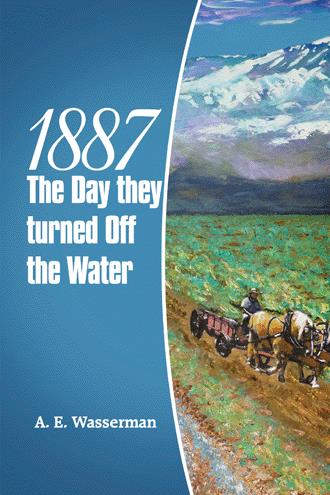 1887: The Day They Turned off the Water
by A.E. Wasserman

This historical mystery thriller, a novella in the Langsford Mysteries, takes readers back to the American Old West where the fight for water in California is just beginning.

Spring 1887. Melting snowpack from the High Sierras will soon turn California’s central valley into lush fields, but an armed man with a Sharps rifle shut off a headwater gate to a watery-ditch and stood guard. After an unexpected confrontation with Double B Ranch owner, Jake Sanders, along with ranch-hand Kacha, this gunman now lies died and Jake along with wounded Kacha, are both jailed for murder.

The unscrupulous lobbyist who “steals to get the office and who gets the office to steal,” Billy “Boss” Carr, claims to know nothing about the man or the situation, in spite of owning the land where the headwater gate is. Water is profitable for Carr, however, and he is aligned with both the prosecutor and judge. It is up to Jake’s wife, Sally, to find a way to prove Jake and Kacha’s innocence: the truth of the matter. But with these powerful men stacking the odds against her, can she?

“Few writers can do what Wasserman has done: weave a historical thriller around the early battles over California water rights and the entrenched racism toward Blacks and the region’s Native Americans. Authentic characters enrich this crisp, exciting legal/thriller.” – Pamela Sheppard, Publishing Consultant

“A thrilling read, with twists and turns up until the very end.” – Will Klipstine, Hollywood Screenwriter/Producer

She is the author of the mystery/thriller Langsford Mystery Series–think Sherlock Holmes meets Downton Abbey. When Lord Langsford stretches the boundaries of Victorian Society, he finds himself in dire situations and must save others as well as himself from spies, thieves, and murderers.

Wasserman’s work, critically acclaimed as “richly atmospheric,” is being noticed by readers and critics alike, and has garnered international attention, not only in the U.S., but Europe and the U.K. as well. She recently received top honors from Writer’s Digest for her work.

After graduating from The Ohio State University, she lived in London, then San Francisco. Currently, she resides in Southern California with her family and her muse, a Border Collie named Topper.

Visit the author’s web site at www.aewasserman.com. You can also find her on Facebook, Twitter, and Goodreads.

The giveaway is open to the US only and ends on December 30th. You must be 18 or older to enter.