C.W. Gortner on tour for The Queen’s Vow: A Novel of Isabella of Castile, June 12th – July 13th

Please join author C.W. Gortner as he tours the blogosphere for the release of THE QUEEN’S VOW: A NOVEL OF ISABELLA OF CASTILE from June 12th through July 13th. 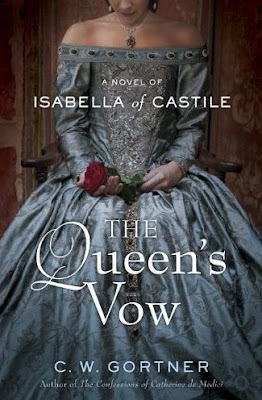 No one believed she was destined for greatness—until she became one of history’s most powerful and controversial queens.

Young Isabella is barely a teenager when she is thrust into danger. Suspected of treason and held captive, she treads a perilous path, until, at age seventeen, she finds herself heiress of Castile, the largest kingdom in Spain. Plunged into a deadly conflict to secure her crown, she is determined to wed the one man whom she has vowed to love yet is forbidden to her—Fernando, prince of Aragón.

As together they unite their two realms under “one crown, one country, one faith,” Isabella and Fernando face an impoverished Spain beset by enemies. With the future of her throne at stake, Isabella resists the zealous demands of the inquisitor, Torquemada, even as she is seduced by the dreams of an enigmatic navigator named Columbus. But when a violent, treacherous battle against an ancient adversary erupts, it will test Isabella’s resolve, her courage, and her tenacious belief in her destiny…

From the glorious palaces of Segovia to the battlefields of Granada and intrigue-laden gardens of Seville, The Queen’s Vow sweeps us into the tumultuous forging of a nation and the complex, fascinating heart of the woman who overcame all odds to become Isabella of Castile.

PRAISE FOR THE QUEEN’S VOW: A NOVEL OF ISABELLA CASTILE

“Isabella is most often remembered as the queen who financed Christopher Columbus’s voyage to the Americas, but in this vivid novel, Gortner reveals that she is much more than this. She is an inspiring young woman who bravely faced the turmoil that surrounded her and managed to hold on to her crown…Gortner has again produced a richly detailed book that is hard to put down.” – Historical Novels Review

“Gortner turns his attention to one of Europe’s most formidable queens, Isabella of Castile… Unique among most royal women of her age (her daughters included), Isabella makes her own choice of a husband, and also grapples with the issues that lead to the launching of the Spanish Inquisition… Gortner avoids romanticizing and sentimentalizing and presents a believable account of a woman determined to control her own fate and shape Spain into a great country.” – Booklist

“Isabella of Castile, the intelligent and fiery Spanish queen best remembered today for funding the voyages of Christopher Columbus, begins this historical novel as a mere pawn in the decadent court of her weak older brother… Isabella’s tenacity and ruthlessness allow her to seize the throne. After she is crowned, however, Isabella faces continued threats to the security of the realm… Gortner pays particular attention to the religious issues Isabella confronted, portraying her as a complex figure . . . Gortner’s latest historical novel should have strong appeal for historical fiction fans.” – Library Journal<
Click HERE to download an excerpt.

C.W. Gortner is the author of The Last Queen, The Confessions of Catherine de Medici and The Tudor Secret.  He holds an MFA in Writing with an emphasis in Renaissance Studies from the New College of California.

In his extensive travels to research his books, he has danced a galliard in a Tudor great hall and experienced life in a Spanish castle. His novels have garnered international praise and been translated into thirteen languages to date. He is also a dedicated advocate for animal rights and environmental issues.

He’s currently at work on his fourth novel for Ballantine Books, about the early years of Lucrezia Borgia, as well as the third novel in his Tudor series,The Elizabeth I Spymaster Chronicles (US) or Elizabeth’s Spymaster (UK).

Monday, June 18th
Review at Confessions of an Avid Reader
Review at The Owl Bookmark Blog
Review & Giveaway at So Many Precious Books, So Little Time

Tuesday, June 19th
Review & Giveaway at Luxury Reading
Review at Diary of a Book Addict
Review at Reviews by Molly

Thursday, June 21st
Review & Giveaway at Peeking Between the Pages

Thursday, June 28th
Review at Let Them Read Books
Review at From the TBR Pile
Author Interview at The True Book Addict

Friday, June 29th
Review at To Read or Not to Read
Review at Mrs. Q Book Addict
Author Guest Post at The Book Faery Reviews

Wednesday, July 4th
Review at The Book Garden
Review at A Chick Who Reads

Tuesday, July 10th
Review at Just One More Paragraph
Review at Always with a Book

Wednesday, July 11th
Review at Jenny Loves to Read
Review at One Book at a Time
Author Interview at Acting Balanced

Thursday, July 12th
Review at Life in the Thumb
Review at The Literate Housewife
Review at Tina’s Book Reviews
Review at Acting Balanced
Author Interview & Giveaway at Always with a Book

Friday, July 13th
Review at The Broke and the Bookish
Author Interview at Just One More Paragraph