Sally Christie on Blog Tour for The Rivals of Versailles, May 1-15 And you thought sisters were a thing to fear! In this compelling follow-up to Sally Christie’s clever and absorbing debut, we meet none other than the Marquise de Pompadour, one of the greatest beauties of her generation and the first bourgeois mistress ever to grace the hallowed halls of Versailles.

The year is 1745 and Louis XV’s bed is once again empty. Enter Jeanne-Antoinette Poisson, a beautiful girl from the middle classes. As a child, a fortune teller had mapped out Jeanne’s destiny: she would become the lover of a king and the most powerful woman in the land. Eventually connections, luck, and a little scheming pave her way to Versailles and into the King’s arms.

All too soon, conniving politicians and hopeful beauties seek to replace the bourgeoise interloper with a more suitable mistress. As Jeanne, now the Marquise de Pompadour, takes on her many rivals—including a lustful lady-in-waiting, a precocious 14-year-old prostitute, and even a cousin of the notorious Nesle sisters—she helps the king give himself over to a life of luxury and depravity. Around them, war rages, discontent grows, and France inches ever closer to the Revolution.

Enigmatic beauty, social climber, actress, trendsetter, patron of the arts, spendthrift, whoremonger, friend, lover, foe: history books say many things about the famous Marquise de Pompadour. Alongside Catherine the Great of Russia and Maria Theresa of Austria, she is considered one of the three most powerful women of the 18th century, and one of the most influential royal mistresses of all time.

In The Rivals of Versailles, Christie gets to the heart of Pompadour’s legendary relationship with Louis XV, France’s most “well-beloved” king. Pompadour was not only his mistress, but his confidante and influential political adviser for close to twenty years. Full of historical insight, decadence, wit and scandal, The Rivals of Versailles is about one woman’s trials and triumphs, her love for a king, and her role in shaping a nation. 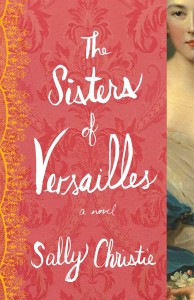 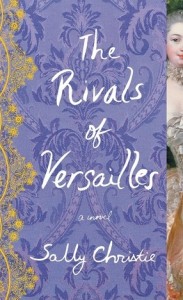 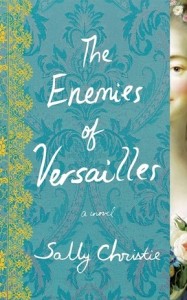 I’m a life-long history buff – and I mean life-long. One of the first adult books I read was Antonia Fraser’s masterful Mary, Queen of Scots. Wow! That book just blew my little ten year old mind: something about the way it brought the past right back to life, made it live again on the page. I date my obsession with history to that time, but I’d been writing (“writing”) ever since I was able to hold a pencil.

If you’d told my 12-year old self that I’d not be a writer when I grew up, I would have laughed you out of the tree house. With a few detours along the way, to work overseas in consulting and development, as well as to go to business school, I’ve finally come full circle to where I think I should be.

I currently live in Toronto and when I’m not writing, I’m playing lots of tennis; doing random historical research (old census records are my favorite); playing Scrabble, and squirrel-watching (the room where I write has French doors leading out to a deck; I avidly follow, and feed, a scruffy gang).

For more information please visit Sally Christie’s website. You can also find her on Goodreads and Pinterest.

Sunday, May 1
Review at A Book Drunkard
Spotlight & Giveaway at Passages to the Past

Wednesday, May 4
Review at To Read or Not to Read
Review at With Her Nose Stuck In A Book

Thursday, May 5
Review at Bookish

Wednesday, May 11
Review at Oh, for the Hook of a Book!
Review, Guest Post, & Giveaway at History Undressed

Thursday, May 12
Review at The Lit Bitch
Review at History From a Woman’s Perspective
Interview at Oh, for the Hook of a Book!

Friday, May 13
Review at #redhead.with.book
Interview at The Maiden’s Court

Vanda on Blog Tour for Juliana, May 2-31 JULIANA is the story of dreams, the dreams of two women who randomly, inevitably cross paths, of stage stardom and soulful songs amid the deceptions required in a prewar 1941 New York City, where love was presumed to be straight, and destiny was supposed to be written in the stars.

It’s 1941 and Alice “Al” Huffman comes from the potato fields of Long Island with her beau, her best girlfriend and her girlfriend’s beau to make it on the Broadway stage only to find she has no talent. On the kids’ first day in New York City, they meet Maxwell P. Hartwell III, a failed nightclub owner and Broadway producer, who, according to Al, looks a little like Clark Gable. He invites them to a nightclub where Al hears Juliana, the glamorous, perpetually-on-the-brink-of stardom singer, for the first time. Al is instantly drawn to her and seeks her out. Juliana is a sexual risk-taker who easily reels in the mesmerized Al.

Al is increasingly pulled into a secret gay underworld of men who wear dresses and women who smoke cigars, while her childhood friends continue in their “normal” lives. Al glides easily between the two worlds until these worlds begin to collide.

Cameo appearances are made by Walter Liverace, Ethel Merman, Tallulah Bankhead and others.

“… captures the fear, excitement, and eroticism of a young lesbian’s awakening in the the 1940s.” — Kirkus Reviews

“Vanda creates a historical novel about a time period in which we know very little about queerness—WWII… Vanda’s narratives, prowess of timely language and setting and character development lend a poignant message: to be queer was to be anti-American.— July Westhale, Lambda Literary Review

“Juliana is the opening act in a series of stories that will cover, discover and recover LGBT history…. Vanda’s clean-shave style in Juliana amplifies the creative ways in which lesbians and gays in the 1940s compartmentalized their identities like meals at an automat…..I can’t wait for the next edition of yestergays’ news to come out” — Alison Fradkin, Curve Magazine

“Spell-binding, entrancing. A gay underworld with the sights and sounds of a lost New York.” — Lisa E. Davis, author of Under the Mink Vanda’s novel, Juliana (Vol. 1, 1941-1944) to be released in February by Booktrope Editions is about LGBT life in 1940s New York City. This novel is the first of a series of novels about the same characters living through successive decades of LGBT history.

As a playwright Vanda has received numerous honors, among them an Edward Albee Fellowship. Her play, Vile Affections, published by Original Works was a finalist for a National Lambda Award. Her play, Patient HM, which later became The Forgetting Curve, won the Pride Stage and Screen’s Women’s Playwriting Award and another play, Why’d Ya Make Me Wear This, Joe, won Celebration Theater’s (where Naked Boys Singing originated) Best New LGBT Play. Vile Affections played at the New York International Fringe Festival to sell-out audiences and was published by Original Works in 2008. The Forgetting Curve was produced in Boston in September 2014 and the producer has plans to bring it to New York.

Vanda’s non-fiction story, “Jack,” was published in Prairie Schooner in Summer 2011 and another non-fiction piece, “Roger: Lost Between Philosophies,” which appears Pentimento was selected by New Millennium Writings for Honorable Mention from a submission pool of 1,300. Other short prose pieces have been or will be published in Sinister Wisdom, The Outrider Review and The Grub Street On-Line Journal.

Monday, May 2
Kick Off & Giveaway at Passages to the Past

Wednesday, May 4
Spotlight at I Heart Reading

Monday, May 9
Review at Eclectic Ramblings of Author Heather Osborne

Tuesday, May 10
Review at Book Nerd

Friday, May 13
Spotlight at CelticLady’s Reviews

Monday, May 16
Interview at Flashlight Commentary

Monday, May 30
Review at SJ2B House of Books

Tuesday, May 31
Blog Tour Wrap Up at Passages to the Past

To enter to win a paperback copy of Juliana by Vanda please enter the giveaway via the GLEAM form below. Two copies are up for grabs!

– Giveaway ends at 11:59pm EST on May 31st. You must be 18 or older to enter.
– Giveaway is open INTERNATIONALLY.
– Only one entry per household.
– All giveaway entrants agree to be honest and not cheat the systems; any suspect of fraud is decided upon by blog/site owner and the sponsor, and entrants may be disqualified at our discretion
– Winner has 48 hours to claim prize or new winner is chosen.