Mitchell James Kaplan on Blog Tour for Into the Unbounded Night, August 31-September 25

Into the Unbounded Night
by Mitchell James Kaplan

When her village in Albion is sacked by the Roman general Vespasian, young Aislin is left without home and family. Determined to exact revenge, she travels to Rome, a sprawling city of wealth, decadence, and power. A “barbarian” in a “civilized” world, Aislin struggles to comprehend Roman ways. From a precarious hand-to-mouth existence on the streets, she becomes the mistress of a wealthy senator, but their child Faolan is born with a disability that renders him unworthy of life in the eyes of his father and other Romans.

Imprisoned for her efforts to topple the Roman regime, Aislin learns of an alternate philosophy from her cellmate, the Judean known today as the Apostle St. Paul. As the capital burns in the Great Fire of 64 AD, he bequeaths to her a mission that will take her to Jerusalem. There, Yohanan, son of Zakkai, has been striving to preserve the tradition of Hillel against the Zealots who advocate for a war of independence. Responding to the Judeans’ revolt, the Romans—again under the leadership of Vespasian—besiege Jerusalem, destroying the Second Temple and with it, the brand of Judean monotheism it represents. Yohanan takes on the mission of preserving what can be preserved, and of re-inventing what must be reinvented.

Throughout Into the Unbounded Night, Aislin’s, Faolan’s, Vespasian’s, and Yohanan’s lives intertwine in unexpected ways that shed light on colonization and its discontents, the relative values of dominant and tyrannized cultures, and the holiness of life itself—even the weakest of lives.

Praise for Into the Unbounded Night

“In Into the Unbounded Night, Mitchell Kaplan offers a rich rendering of war and humanity in first century Rome — of tradition and loss, and the transformative power of healing and collective memory to find one’s way home.” – Nichole Bernier, Boston Globe Bestselling author of The Unfinished Work Of Elizabeth D

“Mitchell James Kaplan is the gloriously talented writer of this dramatic, intense story of conflicting emperors, slaves, priests and exiles in a first century world whose roots and traditions are increasingly torn apart by the brutal rule of Rome. Men and women search for belief and reason, out of which will emerge a new Judaism after the destruction of Jerusalem’s Temple as well as the early beginnings of Christianity. A writer of enormous scope, compassion and poetry, Kaplan has written several of the most compelling characters you will meet in the pages of a book. Into the Unbounded Night sweeps over you like a succession of huge waves. It is truly a major novel.” – Stephanie Cowell, American Book Award recipient, author of Claude And Camille: A Novel Of Monet

“Kaplan’s prose is so rich and agile I felt I was breathing the air of these ancient places, and his evocation of character is no less palpable. Fully embodied and driven by ambition, grief, the clear-eyed desire for truth, and fierce maternal love, these characters plunge, march, and stumble toward their fascinating and entangled destinies.” – Marisa de los Santos, New York Times bestselling novelist of I’ll Be Your Blue Sky and award-winning poet

“I’m a big fan of historical fiction when it’s as good as Mitchell Kaplan’s Into the Unbounded Night. Vividly imagined, Into the Unbounded Night pulls the reader along with beautiful prose, strong characters and a wonderfully realized story.” – Heidi W. Durrow, New York Times best-selling author of The Girl Who Fell From The Sky, winner of the PEN/Bellwether Prize

“A beautiful, informative book. It was gripping throughout, the research never overwhelms the story, but is always part of it. [The] writing is lyrical and evocative of time and place. All the characters are real and interesting. Loved it!” – Martin Fletcher, National Jewish Book Award winner, author of Promised Land

“From the mystical lore of Albion to the Roman siege and destruction of Jerusalem, Kaplan’s meticulous research and evocative writing meld seamlessly to create a vivid, textured, and richly imagined story.” —Beth Hoffman, New York Times and International bestselling author of Saving Ceecee Honeycutt and Looking for Me

“Set in Rome and Judea after the crucifixion of Jesus, Mitchell James Kaplan’s finely crafted and intense second novel delves into the minds and hearts of truly captivating characters. An excellent read.” – Eva Stachniak, winner of the Canadian First Novel Award, author of The Chosen Maiden

“Sensually provocative, verbally sharp and critically witted, Mitchell James Kaplan’s Into the Unbounded Night brings to life the tumultuous birth of Judeo-Christian monotheism in this intimately woven narrative brimming with righteous and riotous characters striving for survival and transcendence across the ravished landscapes of Judea, the Roman Empire, and Britannia.”
– Jessica Maria Tuccelli, an Okra Pick winner of the Southern Independent Booksellers Alliance for her debut novel, Glow

“Kaplan weaves an intricate literary tapestry to create a poetic exploration of early Judeo-Christian and Roman history. He builds a diverse yet connected cast of characters whose encounters inspire timeless self-examination and advance the course of history. An engrossing work not easily forgotten.” – Therese Walsh, critically acclaimed author of The Last Will Of Moira Leahy and The Moon Sisters, founder of the literary blog, Writer Unboxed

Monday, August 31
Review at Passages to the Past

During the Blog Tour, we are giving away 2 copies of Into the Unbounded Night! To enter, please use the Gleam form below.

The giveaway is open to US residents only and ends on September 25th. You must be 18 or older to enter. 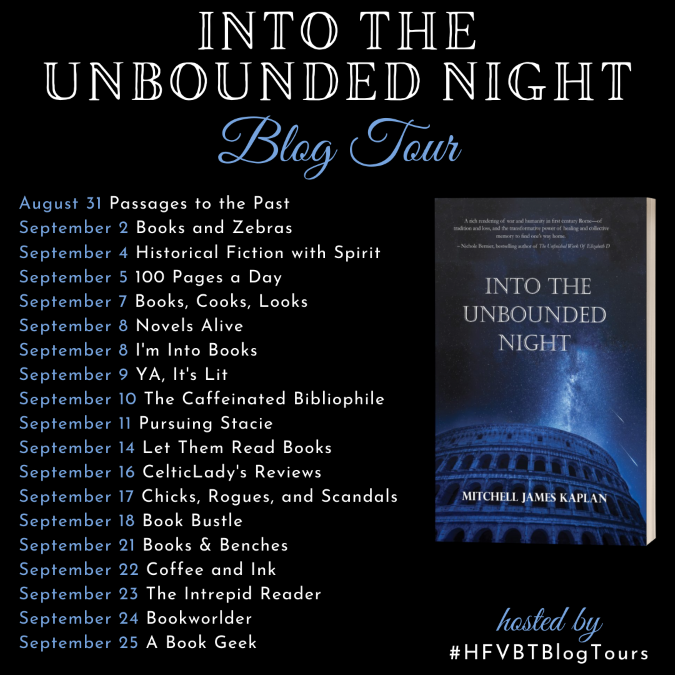