A Deadly Fortune
by Stacie Murphy

A historical mystery in the vein of The Alienist, in which a young woman in Gilded Age New York must use a special talent to unravel a deadly conspiracy.

Amelia Matthew has done the all-but-impossible, especially for an orphan in Gilded Age New York City. Along with her foster brother Jonas, she has parleyed her modest psychic talent into a safe and comfortable life. But safety and comfort vanish when a head injury leaves Amelia with a dramatically-expanded gift. After she publicly channels an angry spirit, she finds herself imprisoned in the notorious insane asylum on Blackwell’s Island. As Jonas searches for a way to free her, Amelia struggles to control her disturbing new abilities and survive a place where cruelty and despair threaten her sanity.

Andrew Cavanaugh is familiar with despair. In the wake of a devastating loss, he abandons a promising medical career—and his place in Philadelphia society—to devote himself to the study and treatment of mental disease. Miss Amelia Matthew is just another patient—until she channels a spirit in front of him and proves her gift is real.

When a distraught mother comes to Andrew searching for her missing daughter—a daughter she believes is being hidden at the asylum—he turns to Amelia. Together, they uncover evidence of a deadly conspiracy, and then it’s no longer just Amelia’s sanity and freedom at stake. Amelia must master her gift and use it to catch a killer—or risk becoming the next victim.

Advance Praise for A Deadly Fortune

“The 1893 world of the infamous lunatic asylum on Blackwell’s Island comes alive in frightening and horrific detail as a string of murders for profit is discovered when a young woman with a gift for contacting the dead becomes an accidental patient. She must fight for her life as well as her freedom in this engrossing mystery that reveals that all was not golden in Gilded Age New York.” —Rosemary Simpson, author of Death Brings a Shadow: A Gilded Age Mystery

“This engrossing mystery, rich in period detail, probes the dark side of Gilded Age New York and the even darker side of life at the insane asylum on Blackwell’s Island. Plucky Amelia Matthew rises to the considerable challenges that surround her, uncovering increasingly dangerous secrets that point to the presence of a murderer in the asylum. Amelia has a special gift that both helps and complicates her search for the truth, making her a unique heroine. A Deadly Fortune builds to a satisfying conclusion that will whet the reader’s appetite for more of Amelia’s adventures!” —Clarissa Harwood, author of Impossible Saints and Bear No Malice

“Stacie Murphy proves herself to be a masterful storyteller with A Deadly Fortune—an elegantly written, fast-paced mystery that blends the dark side of the Gilded Age, great characters, and a paranormal twist. Impossible to put down.” —Julie McElwain, author of the Kendra Donovan Mystery Series

“Murphy serves up a dark side of the Gilded Age with intrigue, historical detail, and captivating characters. This is a mystery to savor!” —Dianne Freeman, award winning author of the Countess of Harleigh mysteries. 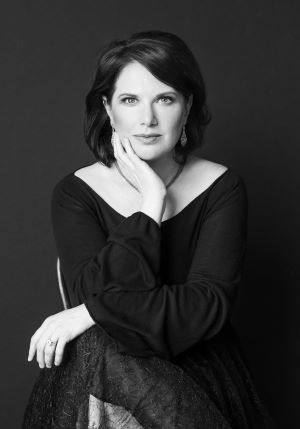 Stacie Murphy grew up near Nashville, TN. She began writing A Deadly Fortune in 2017 as a way to force herself to stay off Twitter in the evenings. She lives in Northern Virginia with her husband, daughter, and the worst cat in the world.

Monday, January 11
Review at Coffee and Ink
Review at 100 Pages a Day

Tuesday, January 12
Excerpt at Probably at the Library

Thursday, January 21
Feature at What Is That Book About

Wednesday, January 27
Review at A Chick Who Reads

Thursday, January 28
Excerpt at Always With a Book

Friday, January 29
Review at Amy’s Booket List
Interview at Madwoman in the Attic

Wednesday, February 3
Feature at Reading is My Remedy
Review & Excerpt at The Book Review Crew

Friday, February 5
Review at Passages to the Past

Enter to win a copy of A Deadly Fortune by Stacie Murphy & a $50 Gift Card to Amazon or your favorite Indie store. Winner’s choice. 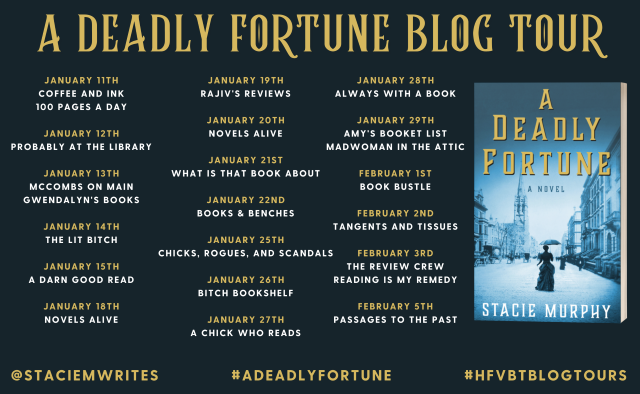 2 responses to “Stacie Murphy on Blog Tour for A Deadly Fortune,
January 11-February 5”