Naked Truth or Equality, the Forbidden Fruit
by Carrie Hayes

From Washington Heights to Washington D.C. comes a true American Herstory. Filled with intrigue, lust, and betrayal, this is the fight for sexual equality.

1868, on the eve of the Gilded Age: Spiritualist TENNESSEE CLAFLIN is smart, sexy, and sometimes clairvoyant. But it’s her sister, VICTORIA WOODHULL, who is going to make history as the first woman to run for President of the United States.

It starts with the seduction of the richest man in America. Next, they’ll take New York City and the suffragist movement by storm, because together, Tennessee and Victoria are a force of nature. Boldly ambitious, they stop at nothing, brushing shoulders with Harriet Beecher Stowe and Susan B. Anthony, using enough chutzpah to make a lady blush.

That is, until their backstabbing family takes them to court, and their carefully spun lives unravel, out in public and in the press.

“Nothing More Than A Shameless Prostitute and A Negro.” – The Guard, Eugene Oregon, 1872

Told from shifting points-of-view and using actual news reportage from the era, Naked Truth is a riveting inside look into the struggle for women’s rights after the Civil War.

“Sometimes it is not enough to be the news, sometimes you have to make the news as well.” –James Gordon Bennett, Jr., Proprietor of the New York Herald

“Hayes writes with such care and authenticity that the reader will likely be unsure where the history ends and the fiction begins.” – KIRKUS REVIEWS

“Naked Truth: Or Equality, the Forbidden Fruit is a rich, balanced, and deftly written story that is as moving as it is entertaining.” ***** – Readers’ Favorite

“(Hayes) has found a fascinating chapter in history to explore, and Victoria and Tennie are compelling protagonists: fiercely determined, morally ambiguous, and deeply complicated. Readers with an interest in first-wave feminism, New York history, and detailed storytelling will enjoy mining this debut, which nicely sets up a sequel.” – Book Life

“I thought this novel was brilliant from start to finish. It is fresh, it is vibrant, and the story is one that has been waiting to be told.” ***** – CoffeePot Book Club

“Naked Truth is a smooth fast read. Carrie Hayes’ marvelous interlacing of history with the narrative sparks an American story as well as a woman story. She has made this pair of wily sisters and their slickster father vivid and timeless.” – Gail Godwin, three time National Book Award Finalist 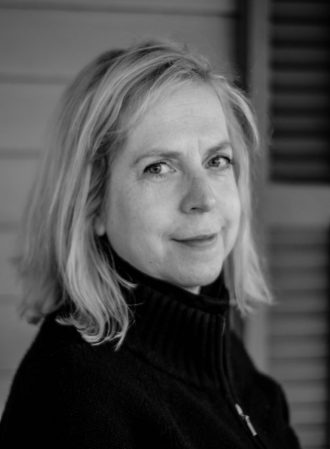 Over the years, Carrie has tried a lot of things. She’s sold vacuum cleaners, annuities and sofas. She’s lived at the beach and lived in Europe. She’s taught school and worked in film. For a while, she was an aspiring librarian, but she fell in love and threw her life away instead. Back in the States, she started over, then met an architect who said, “Why don’t you become a kitchen designer?” So, she did. Eventually she designed interiors, too. And all that time, she was reading. What mattered was having something to read. Slowly, she realized her craving for books sprang from her need to know how things would turn out. Because in real life, you don’t know how things will turn out. But if you write it, you do. Naked Truth or Equality the Forbidden Fruit is her first book.

Monday, October 19
Review at Passages to the Past

Tuesday, October 20
Review at Bookworlder
Feature at I’m All About Books

Wednesday, October 21
Review at YA, it’s Lit
Review at andreajanel_reads

Sunday, October 25
Interview at Passages to the Past

During the Blog Tour, one lucky reader will win a copy of Naked Truth by Carrie Hayes!

The giveaway is open to US residents only and ends on October 28th. You must be 18 or older to enter. 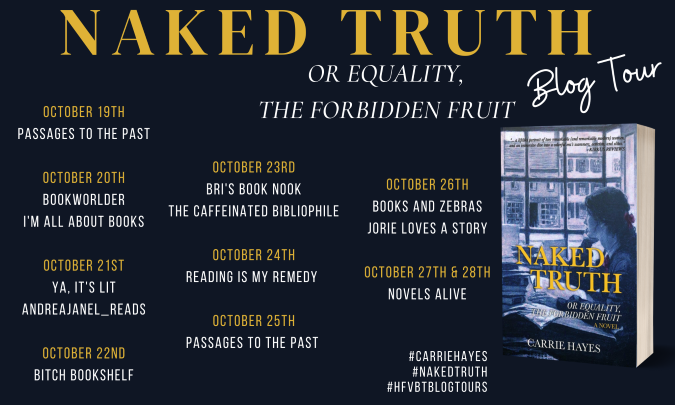