The Bareknuckle Groom
by Holly Bush

1869 Bareknuckle champion, James Thompson, is confident his future continues with beautiful women and victories in the boxing ring. Men admire his skills, power, and quick fists, and are more than willing to bet their hard-earned coins on his name. Women admire his handsome face, his undaunted confidence, and his powerful body. Nothing will change his successfully plotted course, until…

Lucinda Vermeal arrives on the Philadelphia social scene when her father moves them to the city in the hopes that his only daughter will find a suitable partner. After all, her husband will be intimately involved with Vermeal Industries whose business interests and political connections touch France, England and all of the United States. Lucinda’s pale statuesque beauty attracts the finest of Philadelphia’s young men, but her cool and reserved attitude keep them at arm’s length. Until she meets a man willing to challenge her at every turn. Will James Thompson expose Lucinda’s passionate nature like no other man ever could?

Holly makes her home with her husband, one happy Labrador Retriever and a clever Jack Russell rescued from the pound, and two difficult cats in Lancaster County, Pennsylvania. Connect with Holly at www.hollybushbooks.com, on Twitter @hollybushbooks, and on Facebook at Holly Bush. Follow Holly on her Amazon author page to receive new release updates and on BookBub to check out her reviews and get sale information.

Tuesday, March 9
Passages to the Past

Thursday, March 11
Reading is My Remedy 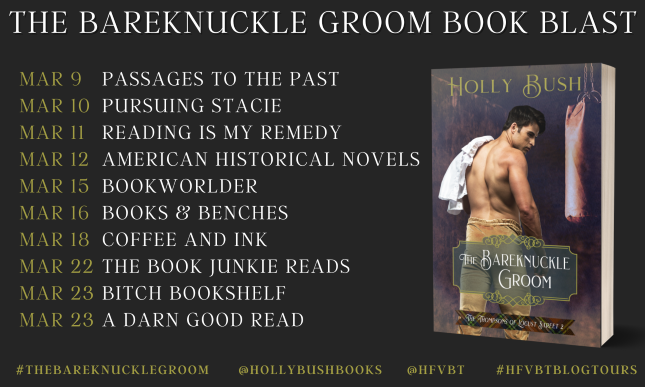