The Tory
by T.J. London

His king or his conscience…which will he choose?

It is the winter of 1776, and Captain John Carlisle, one of His Majesty’s not-so-finest, has gone back to the scene of the crime to right a wrong so dark it left a permanent stain on what was once an illustrious career and left a man broken, defeated, in search of justice…

In an effort to win back his commission, he must discover the true nature of the relationship between the Six Nations of the Iroquois and the Colonial Army. Undercover as a war profiteer, John travels to the treacherous Mohawk River Valley and infiltrates local society, making friends with those he’s come to betray.

But a chance meeting with a beautiful half Oneida innkeeper, whose tragic history is integrally linked to his own, will provide him with the intelligence he needs to complete his mission—and devastate her people.

Now, as the flames of war threaten to consume the Mohawk Valley, John has the chance to not only serve King and country, but to clear his name. When the truth he uncovers ties his own secrets to those in the highest positions of the British military and threatens the very life of the woman he’s come to love, he will be forced to make a choice…

“The pages fly as you immerse yourself in this fantastic adventure.” – RT Book Reviews T.J. London is a rebel, liberal, lover, fighter, diehard punk, and pharmacist-turned-author who loves history. As an author her goal is to fill in the gaps, writing stories about missing history, those little places that are so interesting yet sadly forgotten. Her favorite time periods to write in are first and foremost the American Revolutionary War, the French Revolution, the French and Indian War, the Russian Revolution and the Victorian Era. Her passions are traveling, writing, reading, barre, and sharing a glass of wine with her friends, while she collects experiences in this drama called life. She is a native of Metropolitan Detroit (but secretly dreams of being a Londoner) and resides there with her husband Fred and her beloved cat and writing partner Hamilton.

Thursday, September 24
Review at Passages to the Past

Tuesday, September 29
Feature at What Is That Book About

During the Blog Tour, we are giving away an Audiobook + paperback copy of The Tory by T.J. London to one lucky winner! To enter, please use the Gleam form below.

The giveaway is open to US residents only and ends on October 2nd. You must be 18 or older to enter. 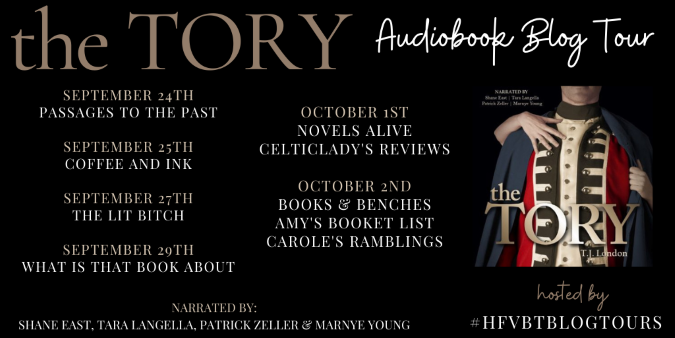