Anya Silverthorne on Blog Tour for The Baroness of New York, May 1-21

The Baroness of New York
by Anya Silverthorne

It’s 1903 and free-spirited 18-year-old Baroness Adele von Mueller has just arrived to live with her spinster aunt in New York City. After a previous impropriety tarnishes her reputation with the German nobility, her father sends her overseas to give her one last chance to marry into money and save the family’s name. Instead, Adele finds herself falling for charming and wickedly handsome Nick Mason, the foreman of a paper factory, who is as gorgeous as he is poor. As family secrets are revealed, Adele learns there’s much more riding on her marrying wealthy than just keeping the family’s name…

Nick Mason has a habit of falling in love with every girl he sees. An orphan, former newspaper seller and now a foreman at a paper mill, he’s nursing a bruised heart after being dumped by a laundry girl. But when he meets Baroness Adele disguised on a night out as a maid in her family’s house, he knows right away there’s something different about her. Once she reveals her true identity, he’s even more intrigued. Nick has fallen for white women before, but never one so wealthy, and never one he knew he couldn’t live without. With most people firmly against their love, he must visit her in secrecy to make their romance blossom.

Nick and Adele must stand up to a society and a family that won’t accept their love for what it is: true and enduring. Can they withstand the storm, or will they be forced apart by a deck that’s stacked against them in this steamy Victorian romance?

Anya Silverthorne makes her debut with The Baroness of New York. She enjoys writing fiction about the late Victorian and early Edwardian era. In “real life,” she is a historian of a completely different time period.

Follow her on social media to stay connected, and up-to-date with new releases, giveaways, and more.

Friday, May 1
Review at Passages to the Past

Monday, May 4
Review at A Chick Who Reads

Tuesday, May 5
Review at Bitch Bookshelf
Excerpt at I’m All About Books

Wednesday, May 6
Excerpt at What Is That Book About

Thursday, May 7
Review at Mommy In Color

Friday, May 8
Review at Gwendalyn’s Books

Sunday, May 10
Guest Post at A Darn Good Read

Wednesday, May 13
Review at Books and Zebras

Thursday, May 14
Guest Post at To Read, Or Not to Read

Friday, May 15
Feature at Chicks, Rogues and Scandals

Monday, May 18
Interview at Passages to the Past

Thursday, May 21
Review at Books in their Natural Habitat

During the Blog Tour, we are giving away a paperback copy of The Baroness of New York! To enter, please use the Gleam form below.

– Giveaway ends at 11:59 pm EST on May 21st. You must be 18 or older to enter.
– Paperback giveaway is open to the US only.
– Only one entry per household.
– All giveaway entrants agree to be honest and not cheat the systems; any suspicion of fraud will be decided upon by blog/site owner and the sponsor, and entrants may be disqualified at our discretion.
– The winner has 48 hours to claim prize or a new winner is chosen. 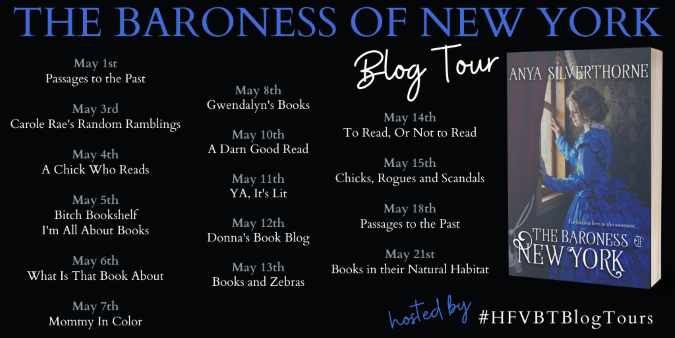