Cyclonic hordes of insects, a telepathic despot, body-swapping sex – just a few of the surprises Salvador Samuels encounters when he finds himself swept back to pre-colonial times walking in the moccasins of a blind Indian – who, in turn, has been transported into Salvador’s body in present day America. Four hundred years apart, they’re bound by a common mission to rescue our world, aided by the mysterious presence of the mounds. Thousands of these ancient earthworks once dotted the landscape of North America. We still don’t know why they were created. Sacred Mounds suggests they are as important today as when they were made over a thousand years ago.

Sacred Mounds, a first novel of magical realism and historical fantasy, weaves the stories of two men, each a stranger in a strange land. With the help of two remarkable women, they must find a way to save our planet and return home.

From Jim Metzner, producer of the Pulse of the Planet series and podcast, with a foreword by Hutke Fields, principal chief of the Natchez Nation.

“This is a rollicking, thought-provoking, rollercoaster of a novel. It’s time traveling on steroids, but it asks big questions. Bravo.” – Ken Burns, filmmaker

“After decades of most American fantasy writers echoing European fantasists and using European myths, it’s refreshing to see an extravagantly imaginative writer go into the history and myths of the Natchez nation… We have a chance to see our own culture through the eyes of a native of the Natchez civilization, so the view is double — us seen by them, them seen by us. It’s amazing to read something so fresh and vivid tying us back into the roots of this land and the people who knew it first.” – Orson Scott Card, author “Ender’s Game”

“Jim Metzner’s Sacred Mounds draws you right into the action with high energy prose, strands of mystery floating in the wind, and lively characters. A great read, with Metzner’s usual deep insights into the amazing workings of the natural world seeping into you while you are caught up in the flow. Enjoy!” – Robert Thurman, President, Tibet House US

“Metzner’s time-bending style is interwoven in a well-researched novel about the great Natchez Nation and the mysterious mounds across the midlands of America. This is a witty and inventive historical fantasy that seduces with twists and turns accompanied by lively street wise contemporary dialogue. It will keep you magnetically amused right up to the surprise ending.” – Jaune Quick-to-See Smith, Member, Confederated Salish and Kootenai Nation, MT

“There are not enough words to fully outline the rich, complex and historically and culturally accurate setting of this tale of supernatural heroism. The novel folds ancient traditional wisdom into the seams of its story with the author’s well-honed narrative skills, delivering the tastes and flavors of its mingling times and cultures with ease and aplomb. One ends up feeling not like an onlooker, but an active participant in the events. The book is hard to put down. It’s a page-turner, but an intelligent one; one that asks more questions than it answers and left, for one, this reader hoping for a sequel.” – Lee Van Laer, Senior Editor, Parabola Magazine

“The tribe’s descent from late prehistoric mound builders connects the Natchez people to one of North America’s most intriguing puzzles. Archaeologists know how the earthworks were built, but excavations cannot reveal what these monuments meant to the native people who built them. With Sacred Mounds, Metzner embraces the mystery to weave a story across time and cultural boundaries.” – Jim Barnett, author “The Natchez Indians: A History to 1735”

“Jim Metzner can really spin a yarn. This story is filled with historical reality as well as spectacular descriptions of what could be. Jump into this book. Feel the challenges of the characters. Join with the Shining Ones. The adventure is yours!” – From the foreword by Hutke Fields, Principal Chief of the Natchez Nation 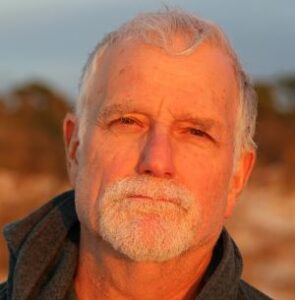 Jim studied acting at Yale Drama School and enjoyed a brief career working as a singer-songwriter in London, where he opened for TRex, Free and Pink Floyd. He has been producing sound-rich audio since 1977, starting with the ground-breaking short format radio series – You’re Hearing Boston. Metzner’s other award-winning series include You’re Hearing San Francisco, You’re Hearing America, The Sounds of Science, Voices of Innovation, and Pulse of the Planet, which has been on the air since 1988 and is now heard widely as a podcast. He has recorded all over the world and received major grants from the National Science Foundation, NASA, the National Endowment for the Humanities and the Grammy Foundation.

Jim has given presentations around the world as a Fulbright Specialist. For more information visit https://www.jimmetznerproductions.com and https://www.sacredmoundsnovel.com. You can also find him on Facebook and Goodreads.

Wednesday, March 3
Review at Passages to the Past

Thursday, March 4
Interview at Passages to the Past

Monday, March 8
Feature at I’m All About Books 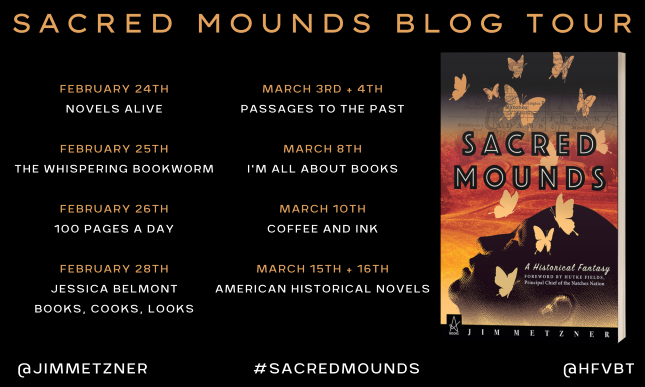