Michelle Diener on tour for Daughter of the Sky, April 8-19

Please join author Michelle Diener as she tours virtually for Daughter of the Sky from April 8-19. The Victorian Empire has declared war on the Zulus if they don’t accede to their outrageous demands. The clock is ticking down to the appointed hour. With no idea why the British are marching three massive columns of men and guns towards them, one Zulu general is prepared to take an impossible risk. But the life he’s gambling with isn’t his own . . .

The sole survivor of a shipwreck off the Zululand coast, 15 year-old Elizabeth Jones is taken in by the Zulus, the people of the sky. Six years later, her white skin becomes useful to the Zulu army as they try to work out why the Victorian Empire has pointed their war-machine at the Zulu nation. Elizabeth is suddenly Zululand’s most important spy.

While infiltrating the British camp, Elizabeth’s disguise as a young soldier is uncovered almost immediately by Captain Jack Burdell. However, he believes the tale she spins of searching for a missing brother and shields her from discovery, allowing her to bunk in his tent and giving her a job as his batman. Burdell is war-weary and disillusioned – no longer willing to follow regulations at all costs.

But as Elizabeth and Jack explore their growing attraction to each other, the two armies move towards their inevitable clash. Elizabeth is torn between the guilt of betrayal and her fierce loyalty to her Zulu family, and when Zulu and British meet on the battlefield, both she and Jack find their hearts and their lives caught in the crossfire.

Monday, April 8
Review at Reflections of a Book Addict
Review at The Adventures of an Intrepid Reader

Tuesday, April 9
Review, Interview & Giveaway at Oh, for the Hook of a Book!

Thursday, April 11
Guest Post at The Reading Reviewer
Feature & Giveaway at Passages to the Past

Michelle Diener on tour for The Emperor’s Conspiracy,
November 26 – December 10

Please join author Michelle Diener as she tours the blogosphere from November 26 – December 10 for her novel, The Emperor’s Conspiracy! 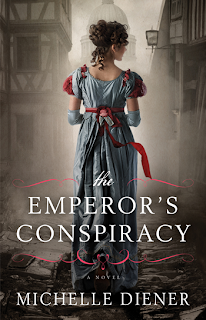 From nineteenth-century London’s elegant ballrooms to its darkest slums, a spirited young woman and a nobleman investigating for the Crown unmask a plot by Napoleon to bleed England of its gold.

Chance led to Charlotte Raven’s transformation from chimney sweep to wealthy, educated noblewoman, but she still walks a delicate tightrope between two worlds, unable to turn her back on the ruthless crime lord who was once her childhood protector.

When Lord Edward Durnham is tapped to solve the mystery of England’s rapidly disappearing gold, his search leads him to the stews of London, and Charlotte becomes his intriguing guide to the city’s dark, forbidding underworld. But as her involvement brings Charlotte to the attention of men who have no qualms about who they hurt, and as Edward forges a grudging alliance with the dangerous ghosts of Charlotte’s former life, she faces a choice: to continue living in limbo, or to close the door on the past and risk her heart and her happiness on an unpredictable future.

Michelle Diener has always had a passion for reading and writing. She began writing stories when her parents gave her a typewriter for her twelfth birthday, and she hasn’t stopped since. Born in London and raised in South Africa, she now lives on the west coast of Australia with her husband and two small children.

Monday, November 26
Review & Giveaway at Peeking Between the Pages

Friday, November 30
Author Interview & Giveaway at Passages to the Past

Tuesday, December 4
Review at Historical Tapestry & The Adventures of an Intrepid Reader