Paths to Freedom
by Paul Bennett

The French and Indian War is over, but the aftermath widens the gulf between the colonies and King George III. A hard handed approach by the King and Parliament fuels the flames of resistance; flames that soon engulf the Mallory clan, consuming the frontier, shattering their hopes for Mallory Town, and changing their lives forever. Revolution is nigh.

“Paths to Freedom (The Mallory Saga #2) exceeded anything that I expected. It is, without a doubt, one of the most moving and most compelling historical fiction books that I have ever read.” – Author MaryAnne Yarde Paul’s education was of the public variety and when he reached Junior High he discovered that his future did not include the fields of mathematics or science. This was generally the case throughout his years in school as he focused more on his interest in history; not just the rote version of names and dates but the causes. Paul studied Classical Civilization at Wayne State University with a smattering of Physical Anthropology thrown in for good measure. Logically, of course, Paul spent the next four decades drawing upon that vast store of knowledge working in large, multi-platform data centers, and is considered in the industry as a bona fide IBM Mainframe dinosaur heading for extinction. Paul currently resides in the quaint New England town of Salem, Massachusetts with his wife, Daryl. The three children have all grown, in the process turning Paul’s beard gray, and have now provided four grandchildren; the author is now going bald.

For more information, please visit the Mallory Saga Facebook page. You can also find Paul on his Blog, Twitter, and Goodreads.

Tuesday, January 28
Excerpt at Passages to the Past

Thursday, January 30
Review at YA, It’s Lit
Feature at Broken Teepee
Feature at I’m All About Books

Friday, January 31
Interview at Passages to the Past

During the Blog Tour, we are giving away 2 sets of Clash of Empires and Paths to Freedom in paperback! To enter, please use the Gleam form below.

– Giveaway ends at 11:59 pm EST on February 4th. You must be 18 or older to enter.
– Paperback giveaway is open to the US only.
– Only one entry per household.
– All giveaway entrants agree to be honest and not cheat the systems; any suspicion of fraud will be decided upon by blog/site owner and the sponsor, and entrants may be disqualified at our discretion.
– The winner has 48 hours to claim prize or a new winner is chosen. 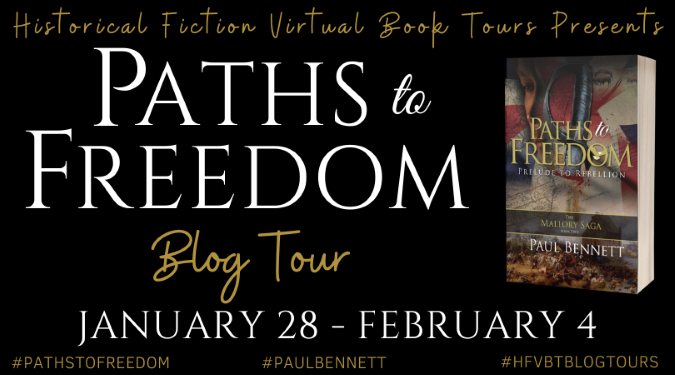 2 responses to “Paul Bennett on Blog Tour for Paths to Freedom, January 28-February 4”