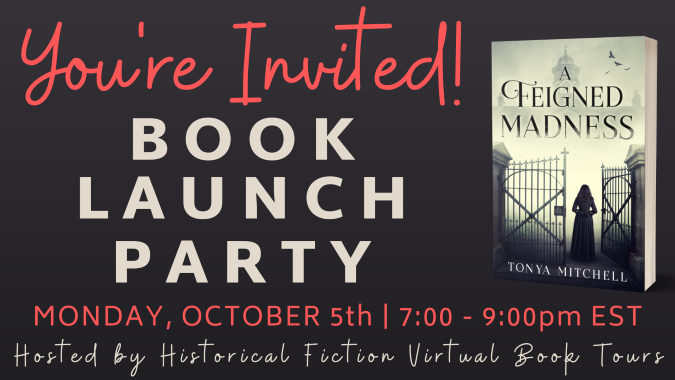 You are cordially invited to the Online Launch Party for Tonya Mitchell’s A Feigned Madness! Join us on Monday, October 5th from 7:00-9:00pm EST to learn more about Tonya’s new release about Nellie Bly! We will have giveaways too! Hope to see you there!

The party will happen HERE! RSVP today to reserve your spot! 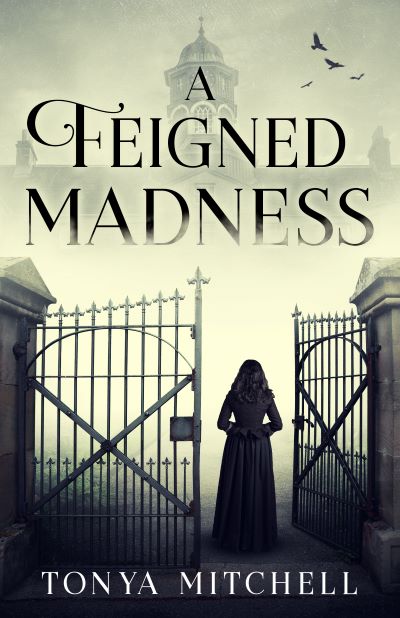 A Feigned Madness
by Tonya Mitchell

The insane asylum on Blackwell’s Island is a human rat trap. It is easy to get in, but once there it is impossible to get out. —Nellie Bly

Elizabeth Cochrane has a secret.

She isn’t the madwoman with amnesia the doctors and inmates at Blackwell’s Asylum think she is.

In truth, she’s working undercover for the New York World. When the managing editor refuses to hire her because she’s a woman, Elizabeth strikes a deal: in exchange for a job, she’ll impersonate a lunatic to expose a local asylum’s abuses.

When she arrives at the asylum, Elizabeth realizes she must make a decision—is she there merely to bear witness, or to intervene on behalf of the abused inmates? Can she interfere without blowing her cover? As the superintendent of the asylum grows increasingly suspicious, Elizabeth knows her scheme—and her dream of becoming a journalist in New York—is in jeopardy.

A Feigned Madness is a meticulously researched, fictionalized account of the woman who would come to be known as daredevil reporter Nellie Bly. At a time of cutthroat journalism, when newspapers battled for readers at any cost, Bly emerged as one of the first to break through the gender barrier—a woman who would, through her daring exploits, forge a trail for women fighting for their place in the world.

“Simply addictive… Set in the 1890s, Mitchell’s meticulously researched, gripping novel tells a fictionalized account of the daredevil journalist Nellie Bly’s journey of breaking through the gender barriers as she sets on a path to unravel dark secrets of authorities at a mental asylum. The institutions for the insane on Blackwell’s Island in New York City’s East River are notoriously famous for one thing: it’s easy to get in, but once there, it is impossible to get out. Disgusted by the unfair gender-based practices, the ambitious Elizabeth Cochrane, aka Nellie Bly, takes on a dangerous assignment of exposing corrupt authorities at one of the asylums to prove her expertise as a reporter, putting her life at risk. Through Elizabeth’s journey, Mitchell sketches a vivid and at times horrifying portrait of the asylum, revealing a bleak picture of institutional failure. The audacious scenarios Elizabeth finds herself in ring with authenticity. Brilliantly tackling Elizabeth’s past and present, Mitchell has delivered a satisfying and riveting tale. Historical fiction lovers are in for a treat.” -The Prairies Book Review

“Mitchell takes us on a journey through the gates of hell to a place as mesmerizing as it is dark. A compelling read for anyone with an interest in Victorian history.” -Pam Lecky, author of The Lucy Lawrence Mystery Series Ever since reading Jane Eyre in high school, Tonya has been drawn to dark stories, particularly of the gothic variety. Her influences include Mary Shelley, Edgar Allan Poe, and Bram Stoker. More contemporarily, she loves the work of Shirley Jackson, Agatha Christie, Victoria Holt, Margaret Atwood, and Laura Purcell.

​When she landed on a story about a woman who pretended to be insane in order to write a newspaper story, she knew she’d landed on something she was meant to write.

Tonya received her BA in journalism from Indiana University. Her short fiction has appeared in The Copperfield Review, Words Undone, and The Front Porch Review, as well as in various anthologies, including Furtive Dalliance, Welcome to Elsewhere, and Glimmer and Other Stories and Poems, for which she won the Cinnamon Press award in fiction.

She is a self-professed Anglophile and is obsessed with all things relating to the Victorian period. She is a member of the Historical Novel Society North America and resides in Cincinnati, Ohio with her husband and three wildly energetic sons.

A Feigned Madness is her first novel.