Unemployed actors, profiteers, cabaret girls, and impoverished aristocracy – out of this wild set of characters populating Weimar Berlin, Margarete Gräfin von Steinhoff belongs to the latter category. Having lost everything due to hyper-inflation, she considers jumping into the freezing waters of the Spree rather than facing the humiliating existence shared by millions of her fellow Germans. However, a chance meeting makes her change her mind at the last moment and offers her a chance to rely on the help of the metropolis itself, where anything can be sold and bought for money and where connections are everything. The bustling nightlife of cosmopolitan Berlin, with its casinos and dance halls, brings good income for the ones who don’t burden themselves too heavily with morals.

After a New Year’s Eve party, Margot finally meets her ever-absent and mysterious neighbor, Paul Schneider, who makes a living by producing a certain type of film for his rich clientele. Under his guidance, Margot discovers a new passion of hers – photography and soon, her talents are noticed by the prominent newspaper, Berliner Tageblatt itself. But being an official photographer of the most celebrated events of the La Scala and most famous Berlin theaters no longer satisfies Margot’s ambitions. As soon as the chance presents itself for her to get involved with the cinematography on the set of “Metropolis” – the film with the highest budget ever produced by the UFA – Margot jumps at it, without thinking twice. At the same time, Paul becomes involved with a rival project, “The Holy Mountain,” which stars an as yet unknown actress and an emerging director in, Leni Riefenstahl. As the two women meet, professional rivalry soon turns into a true friendship, fueled by their passion for cinematography. However, due to the economic woes facing Germany, both projects soon run out of money and now, both film crews must go to extreme lengths to save their respective productions.

Set against the backdrop of a decadent, vibrant, and fascinatingly liberal Weimar Berlin, “Metropolis” is a novel of survival, self-discovery, and self-sacrifice, in the name of art, love, and friendship. Ellie Midwood is a USA Today bestselling and award-winning historical fiction author. She owes her interest in the history of the Second World War to her grandfather, Junior Sergeant in the 2nd Guards Tank Army of the First Belorussian Front, who began telling her about his experiences on the frontline when she was a young girl. Growing up, her interest in history only deepened and transformed from reading about the war to writing about it. After obtaining her BA in Linguistics, Ellie decided to make writing her full-time career and began working on her first full-length historical novel, “The Girl from Berlin.” Ellie is continuously enriching her library with new research material and feeds her passion for WWII and Holocaust history by collecting rare memorabilia and documents.

In her free time, Ellie is a health-obsessed yoga enthusiast, neat freak, adventurer, Nazi Germany history expert, polyglot, philosopher, a proud Jew, and a doggie mama. Ellie lives in New York with her fiancé and their Chihuahua named Shark Bait.

For more information on Ellie and her novels, please visit her website. You can also find her on Facebook, Amazon, and Goodreads.

Friday, January 31
Review at Passages to the Past
Feature at View from the Birdhouse

Friday, February 7
Review at A Chick Who Reads

Wednesday, February 12
Review at Books and Zebras
Excerpt at Chicks, Rogues and Scandals

Friday, February 14
Review at Clarissa Reads it All
Feature at I’m All About Books

Sunday, February 16
Review at Reading is My Remedy

Thursday, February 20
Review at Books In Their Natural Habitat

During the Blog Tour, we are giving away a paperback copy of Metropolis! To enter, please use the Gleam form below.

– Giveaway ends at 11:59 pm EST on February 21st. You must be 18 or older to enter.
– Giveaway is open to the US only.
– Only one entry per household.
– All giveaway entrants agree to be honest and not cheat the systems; any suspicion of fraud will be decided upon by blog/site owner and the sponsor, and entrants may be disqualified at our discretion.
– The winner has 48 hours to claim prize or a new winner is chosen. 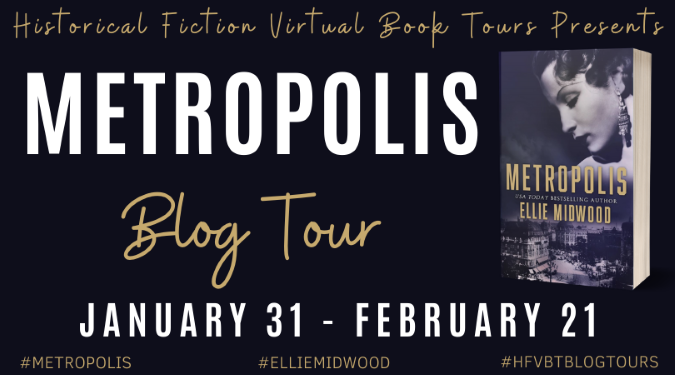