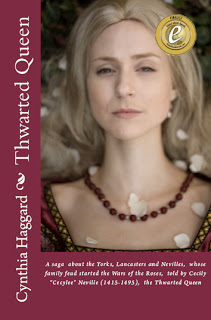 THWARTED QUEEN is a portrait of a woman trapped by power, a marriage undone by betrayal, and a King brought down by fear.

Cecylee is the apple of her mother’s eye. The seventh daughter, she is the only one left unmarried by 1424, the year she turns nine. In her father’s eyes, however, she is merely a valuable pawn in the game of marriage. The Earl of Westmorland plans to marry his youngest daughter to 13-year-old Richard, Duke of York, who is close to the throne. He wants this splendid match to take place so badly, he locks his daughter up.

The event that fuels the narrative is Cecylee’s encounter with Blaybourne, a handsome archer, when she is twenty-six years old. This love affair produces a child (the “One Seed” of Book II), who becomes King Edward IV. But how does a public figure like Cecylee, whose position depends upon the goodwill of her husband, carry off such an affair? The duke could have locked her up, or disposed of this illegitimate son.

But Richard does neither, keeping her firmly by his side as he tries to make his voice heard in the tumultuous years that encompass the end of the Hundred Years War – during which England loses all of her possessions in France – and the opening phase of the Wars of the Roses. He inherits the political mantle of his mentor Duke Humphrey of Gloucester, and become’s the people’s champion. The rambunctious Londoners are unhappy that their country has become mired in misrule due to the ineptitude of a King prone to fits of madness. Nor are they better pleased by the attempts of the King’s French wife to maneuver herself into power, especially as she was responsible for England’s losses in France. But can Richard and Cecylee prevail? Everywhere, their enemies lurk in the shadows.

This book is filled with many voices, not least those of the Londoners, who forged their political destiny by engaging in public debate with the powerful aristocrats of the time. By their courageous acts, these fifteenth-century Londoners set the stage for American Democracy. 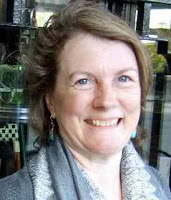 Born and raised in Surrey, England, CYNTHIA SALLY HAGGARD has lived in the United States for twenty-nine years. She has had four careers: violinist, cognitive scientist, medical writer and novelist. Why does she write historical novels? Because she has been reading them with great enjoyment since she was a child. Because she has a great imagination and a love of history that won’t go away. And because she has an annoying tendency to remember trivial details of the past and to treat long-dead people as if they were more real than those around her.

Cynthia’s biggest influence was her grandmother, Stephanie Treffry, who had a natural story-telling ability. As a widow in 1970s Britain, Grandma Stephanie didn’t drive a car, so would spend time waiting for buses. Her stories were about various encounters she had at those bus-stops. Nothing extraordinary, except that she made them so funny, everyone was in fits of laughter. A born entertainer, Cynthia tries to emulate her when she writes her novels.

In case you were wondering, she is related to H. Rider Haggard, the author of SHE and KING SOLOMONS’S MINES. (H. Rider Haggard was a younger brother of her great-grandfather.) Cynthia Sally Haggard is a member of the Historical Novel Society. You can visit her website at www.spunstories.com.

Wednesday, February 13
Review & Giveaway at Peeking Between the Pages

Monday, February 18
Review at The Lit Bitch
Review & Giveaway at Confessions of an Avid Reader

Monday, February 25
Review at Oh, for the Hook of a Book!

Tuesday, February 26
Review at Kinx’s Book Nook
Interview & Giveaway at Oh, for the Hook of a Book!

Wednesday, February 27
Review at A Chick Who Reads

Thursday, February 28
Author Guest Post at A Chick Who Reads