State of Treason
by Paul Walker

“A gripping and evocative page-turner that vibrantly brings Elizabeth’s London to life.” -Steven Veerapen, author of A Dangerous Trade

London 1578 – a cauldron of conspiracy, intrigue and torture.

The might of Spain and the growing influence of the Catholic League in France all threaten the stability of Queen Elizabeth and her state.

William Constable, a physician and astrologer, is summoned to the presence of the Queen’s spymaster, Sir Francis Walsingham. He is charged to assist a renowned Puritan, John Foxe, in uncovering the secrets of a mysterious cabinet containing an astrological chart and coded message. Together, these claim Elizabeth has a hidden, illegitimate child (an “unknowing maid”) who will be declared to the masses and serve as the focus for an invasion.

Constable must uncover the identity of the plotters, unaware that he is also under suspicion.

A connection to his estranged mentor, Doctor Dee, comes under scrutiny.

Pressured into taking up a position as a court physician, Constable becomes a reluctant spy.

Do the stars and cipher speak true, or is there some other malign intent in the complex web of scheming?

Constable becomes an unwitting pawn, in a complex game of thrones and power.

State of Treason is the first in a series of Elizabethan thrillers featuring William Constable.

Available on Amazon US and Amazon UK

Paul Walker inherited his love of British history and historical fiction from his mother who was an active member of the Richard III Society.

State of Treason is the first in a planned series of Elizabethan spy thrillers. The plot is based around real characters and events in London of the 1570’s. The hero, William Constable, is an astrologer and also a skeptic. He is also a mathematician, astronomer and inventor of a navigational aid for ships. The distinction between astrology and astronomy was blurred in the sixteenth century.

The second book in the series, A Necessary Killing, was published in November 2019.

Paul is married and lives in a village 30 miles north of London. His writing is regularly disrupted by children and a growing number of grandchildren and dogs.

Tuesday, February 4
Review at Passages to the Past

Wednesday, February 5
Interview at Passages to the Past

Thursday, February 6
Review at Nursebookie
Review at Tales from the Book Dragon

During the Blog Tour, we are giving away a paperback copy of State of Treason! To enter, please use the Gleam form below.

– Giveaway ends at 11:59 pm EST on February 6th. You must be 18 or older to enter.
– Paperback giveaway is open internationally.
– Only one entry per household.
– All giveaway entrants agree to be honest and not cheat the systems; any suspicion of fraud will be decided upon by blog/site owner and the sponsor, and entrants may be disqualified at our discretion.
– The winner has 48 hours to claim prize or a new winner is chosen. 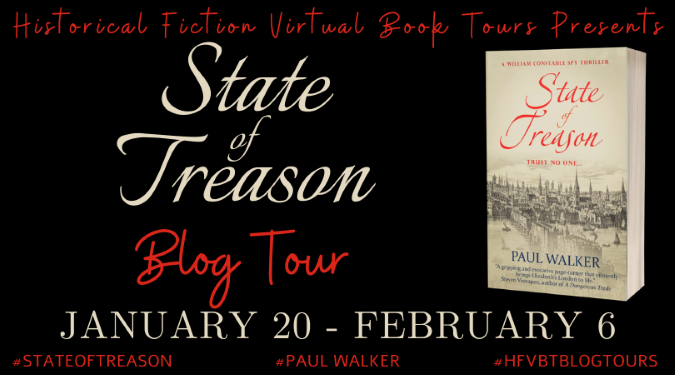