A Noble Cunning: The Countess and the Tower
by Patricia Bernstein

A thrilling tale, based on a true story, of one woman’s tremendous courage and incomparable wit in trying to rescue her husband from the Tower of London the night before he is to be executed.

The heroine of A Noble Cunning, Bethan Glentaggart, Countess of Clarencefield, a persecuted Catholic noblewoman, is determined to try every possible means of saving her husband’s life, with the help of a group of devoted women friends.

Amid the turbulence of the 1715 Rebellion against England’s first German king George I, Bethan faces down a mob attack on her home, travels alone from the Scottish Lowlands to London through one of the worst snowstorms in many years, and confronts a cruel king before his court to plead for mercy for her husband Gavin. As a last resort, Bethan and her friends must devise and put in motion a devilishly complex scheme featuring multiple disguises and even the judicious use of poison to try to free Gavin.

Though rich with historical gossip and pageantry, Bethan’s story also demonstrates the damage that politics and religious fanaticism can inflict on the lives of individuals.

“A riveting tale of one woman’s courage and determination! Bernstein has crafted a dazzling heroine in Bethan Glentaggart. After enduring the religious fanaticism of Protestants, the vain heroics of Scottish lords, and the insipid insecurities of King George I, Bethan must devise and carry out a daring plan to rescue her husband from the Tower of London before his execution for treason. Her forceful personality makes A Noble Cunning a gripping page-turner!”

– David Blixt, author of What Girls Are Good For and Her Majesty’s Will

“I love a good historical novel about women with brains, heart, and courage. In A Noble Cunning, Patricia Bernstein’s finely-spun yarn of Jacobite sympathizer Countess of Clarencefield-inspired by the true adventures of Winifred Maxwell, Countess of Nithsdale-the author brings both the Scottish Lowlands and Hanoverian London vividly to life with a keen eye for period detail and a heart-stopping denouement.”

“This is a riveting and largely unknown story, based on true events, about a remarkable woman’s strength, love and courage against formidable odds. Set amidst English and Scottish hostilities in the early 1700s, and the terrible religious persecution of the period, Patricia Bernstein brings the countess’s extraordinary tale to dramatic life.”

– Karen Brooks, International Best-selling Author of The Good Wife of Bath and The Locksmith’s Daughter

“Wow! This spellbinding historical novel captures the religious aspects of an intriguing and true story. I was especially taken by the extraordinary Countess, the unsung Catholic heroine in a time of unrelenting persecution of Catholics in England and Scotland. Her dedication to her Catholic faith and especially to the Virgin Mary, her unstoppable courage, unimaginable cunning, and unflappable determination exceeded most women of her day. I also loved that Bethan Glentaggart, based on the true story of Winifred Maxwell, performs her audacious feat with the help of a group of devoted and courageous women friends. Patricia Bernstein adds dramatic flair and suspense that capture you to the very end. It is a must-read.”

“Patricia Bernstein’s sumptuously detailed historical novel, A Noble Cunning: The Countess and the Tower, is set in 18th century Scotland and is based on the remarkable true story of a fiercely courageous woman fighting tirelessly against political and religious tyranny to save her husband, imprisoned and condemned to die in the Tower of London.”

“In A Noble Cunning, Patricia Bernstein paints a compelling and dramatic portrait of Scotland in the perilous time of the 1715 Jacobite Rebellion, seen through the eyes of the courageous Bethan Carlisle Glentaggart, Countess of a Clarencefield, a Catholic noblewoman who defies danger to undertake an ingenious plot to save her husband from a traitor’s terrible death. Fans of historical fiction will find much to enjoy in this immersive tale of adventure, rich with period detail.” 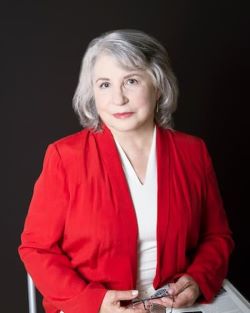 Native Texan Patricia Bernstein grew up in Dallas. After earning a Degree of Distinction in American Studies from Smith College, she founded her public relations agency in Houston. In 2018, her third book was named a Finalist for the Ramirez Family Award from the Texas Institute of Letters. The Austin American Statesman named the book to a list of 53 of the best books ever written about Texas. Patricia’s nonfiction was previously published by Simon & Schuster and Texas A&M University Press. Patricia lives in Houston with her husband, Alan Bernstein, where she pursues her other great artistic love, singing with Opera in the Heights and other organizations. She also basks in the glory of her three amazing daughters. A Noble Cunning is her debut novel. You can learn more about Patricia and her work at PatriciaBernstein.com.