Alina: A Song For the Telling
by Malve von Hassell

“You should be grateful, my girl. You have no dowry, and I am doing everything I can to get you settled. You are hardly any man’s dream.” Alina’s brother, Milos, pulled his face into a perfect copy of Aunt Marci’s sour expression, primly pursing his mouth. He had got her querulous tone just right.

I pinched my lips together, trying not to laugh. But it was true; Aunt Marci had already introduced me to several suitors. So far I had managed to decline their suits politely.

Maybe Alina’s aunt was right. How could she possibly hope to become a musician, a trobairitz, as impoverished as she was and without the status of a good marriage?

But fourteen-year-old Alina refuses to accept the oppressing life her strict aunt wants to impose upon her. When the perfect opportunity comes along for her to escape, she and her brother embark on a journey through the Byzantine Empire all the way to Jerusalem.

Alina soon finds herself embroiled in the political intrigue of noble courts as she fights to realize her dream of becoming a female troubadour.

Malve von Hassell is a writer, researcher, and translator. Born in Italy, she spent part of her childhood in Belgium and Germany before moving to the United States. She lives in Southampton, New York, close to the ocean and a bay beach where she meets flying sea robins and turtles on her morning walks with her rescue dog Loki. She enjoys reading, playing chess with her son, gardening, anything to do with horses, and dreams of someday touring Mongolia on horseback. Her works include the children’s picture book, Letters from the Tooth Fairy, written in response to her son’s letters to the tooth fairy; The Falconer’s Apprentice, her first historical fiction novel for young readers; The Amber Crane, a historical fiction novel set in Germany in the 17th century, and Alina: A Song for the Telling, a coming-of-age story of a young woman from Provence in the 12th century who dreams of being a musician.

Thursday, August 27
Review at Passages to the Past

Wednesday, September 2
Review at History from a Woman’s Perspective

During the Blog Tour, we are giving away a paperback copy of Alina by Malve von Hassell! To enter, please use the Gleam form below.

The giveaway is open to US residents only and ends on September 7th. You must be 18 or older to enter. 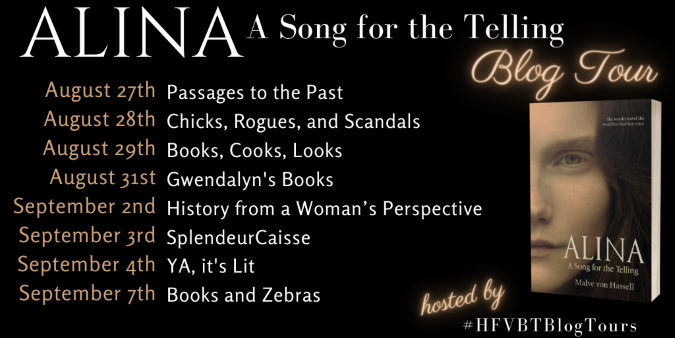