Author Anne Easter Smith on Blog Tour for This Son of York, November 10-17 This Son of York
by Anne Easter Smith

“Now is the winter of our discontent, Made glorious summer by This Son of York…” — William Shakespeare, Richard III

Richard III was Anne’s muse for her first five books, but, finally, in This Son of York he becomes her protagonist. The story of this English king is one of history’s most compelling, made even more fascinating through the discovery in 2012 of his bones buried under a car park in Leicester.

This new portrait of England’s most controversial king is meticulously researched and brings to vivid life the troubled, complex Richard of Gloucester, who ruled for two years over an England tired of war and civil strife. The loyal and dutiful youngest son of York, Richard lived most of his short life in the shadow of his brother, Edward IV, loyally supporting his sibling until the mantle of power was thrust unexpectedly on him.

Some of his actions and motives were misunderstood by his enemies to have been a deliberate usurpation of the throne, but throughout his life, Richard never demonstrated any loftier ambitions than to honorably discharge his duty to his family and his country.

In a gentler vein, despite the cruel onset of severe scoliosis in his teens, Richard did find love, first with a lover and then in his marriage to Anne Neville. Between these two devoted women in his life, he sired three and perhaps four children.

Bringing the Plantagenet dynasty to a violent end, Richard was the last king of England to die in battle. This Son of York is a faithful chronicle of this much maligned man.

Anne is the award-winning author of The King’s Grace and the best-selling A Rose for the Crown, Daughter of York, Queen By Right, and Royal Mistress. She is an expert on Richard III, having studied the king and his times for decades. Her sixth book, This Son of York, will be published soon. She grew up in England, Germany and Egypt, and has been a resident/citizen of the US since 1968. Anne was the Features Editor at a daily newspaper in northern New York State for ten years, and her writing has been published in several national magazines.

Tuesday, November 12
Review at Passages to the Past
Review at So Many Books, So Little Time

Wednesday, November 13
Review at Macsbooks
Interview at The Writing Desk

Thursday, November 14
Review at A Chick Who Reads

Saturday, November 16
Review at Curling up by the Fire
Review & Excerpt at Nursebookie
Review at Red Headed Book Lady
Review at WTF Are You Reading?
Review at Historical Fiction with Spirit

During the Blog Tour, we are giving away a copy of This Son of York! To enter, please use the Gleam form below.

– Giveaway ends at 11:59 pm EST on November 17th. You must be 18 or older to enter.
– Paperback giveaway is open to the US only.
– Only one entry per household.
– All giveaway entrants agree to be honest and not cheat the systems; any suspicion of fraud will be decided upon by blog/site owner and the sponsor, and entrants may be disqualified at our discretion.
– The winner has 48 hours to claim prize or a new winner is chosen.

This Son of York On February 4, 2013 scientists from the University of Leicester made a monumental historical announcement, that the skeletal remains found under a car park in Leicester, England were those of King Richard III! To celebrate this monumental historical discovery author and Richard III historian, Anne Easter Smith, will be launching a pre-publication tour for her upcoming novel, Royal Mistress, from February 7 – 22.

King Richard III was the reason I became an author. After reading Josephine Tey’s Daughter of Time in my early 20s, Richard became a bit of an obsession. Well into my 50s, after developing some writing skills as a newspaper editor, I decided to attempt a novel about who I thought the real Richard was. It was a labor of love and was eventually published as A Rose for the Crown by Touchstone at Simon & Schuster.

Richard is either a minor character or is made mention of in all of my books. From that first book where I looked at him through the eyes of a young woman who loved him, to my newest, Royal Mistress, Richard went from being a protagonist to an antagonist as I was forced to look at his actions from other people’s point of view.

So when the discovery of a skeleton beneath a car park in Leicester was made and the bones thought to be those of my favorite king, I was very excited. Richard is the only crowned king of England whose grave has never been found. The news has rekindled interest in the man, and Ricardians throughout the world! From the author of A Rose for the Crown and Daughter of York comes another engrossing historical novel of the York family in the Wars of the Roses, telling the fascinating story of the rise and fall of the final and favorite mistress of Edward IV.

Jane Lambert, the quick-witted and alluring daughter of a silk merchant, is twenty-two and still unmarried. When Jane’s father finally finds her a match, she’s married off to the dull, older silk merchant William Shore—but her heart belongs to another. Marriage doesn’t stop Jane Shore from flirtation, however, and when the king’s chamberlain and friend, Will Hastings, comes to her husband’s shop, Will knows his King will find her irresistible.

Edward IV has everything: power, majestic bearing, superior military leadership, a sensual nature, and charisma. And with Jane as his mistress, he also finds true happiness. But when his hedonistic tendencies get in the way of being the strong leader England needs, his life, as well as that of Jane Shore and Will Hastings, hang in the balance.

This dramatic tale has been an inspiration to poets and playwrights for 500 years, and told through the unique perspective of a woman plucked from obscurity and thrust into a life of notoriety, Royal Mistress is sure to enthrall today’s historical fiction lovers as well. Anne Easter Smith is an award-winning historical novelist whose research and writing concentrates on England in the 15th century. Meticulous historical research, rich period detail, and compelling female protagonists combine to provide the reader with a sweeping portrait of England in the time of the Wars of the Roses. Her critically acclaimed first book, A Rose for the Crown, debuted in 2006, and her third, The King’s Grace, was the recipient of a Romantic Times Review Best Biography award in 2009. A Queen by Right has been nominated by Romantic TImes Review for the Best Historical Fiction award, 2011.

Articles on the Discovery

Anne talks to NPI’s The World

Friday, February 8
Interview at The Maiden’s Court
Guest Post at Confessions of an Avid Reader

Monday, February 18
Guest Post at So Many Books, So Little Time

Wednesday, February 27
Interview at Muse in the Fog Book Reviews

May 9th
Author Interview at A Writer’s Life: Working with the Muse

May 10th
Author Guest Post at The Lady Gwyn Kingdom’s

May 11th
Author Interview & Giveaway at Let Them Read Books

May 12th
Review at Broken Teepee

May 16th
Review at Luxury Reading
Guest Post at The Bookworm

May 17th
Review at Just One More Paragraph

May 19th
Review at Let Them Read Books

May 31st
Review at Unabridged Chick 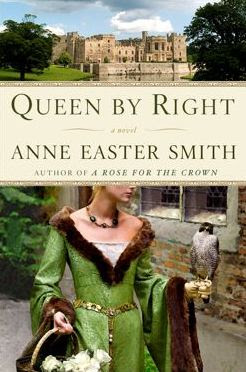 From the award-winning author of A Rose for the Crown, Daughter of York, and The King’s Grace comes another masterful historical novel—the story of Cecily of York, mother of two kings and the heroine of one of history’s greatest love stories.

Anne Easter Smith’s novels are beloved by readers for their ability “to grab you, sweep you along with the story, and make you fall in love with the characters.”

In Cecily Neville, duchess of York and ancestor of every English monarch to the present day, she has found her most engrossing character yet. History remembers Cecily of York standing on the steps of the Market Cross at Ludlow, facing an attacking army while holding the hands of her two young sons. Queen by Right reveals how she came to step into her destiny, beginning with her marriage to Richard, duke of York, whom she meets when she is nine and he is thirteen. Raised together in her father’s household, they become a true love match and together face personal tragedies, pivotal events of history, and deadly political intrigue. All of England knows that Richard has a clear claim to the throne, and when King Henry VI becomes unfit to rule, Cecily must put aside her hopes and fears and help her husband decide what is right for their family and their country. Queen by Right marks Anne Easter Smith’s greatest achievement, a book that every fan of sweeping, exquisitely detailed historical fiction will devour.

A native of the UK, Anne Easter Smith is an American citizen who has lived in the US for more than 35 years. She was the Features Editor at the Press-Republican in Plattsburgh, NY for 10 years, and her writing has been featured in a number of national magazines. She lives in coastal New England.