Dennis J. Turner on Blog tour for What Did You Do In The War, Sister? July 6-17

What Did You Do In The War, Sister?: Catholic Sisters in the Nazi Resistance
by Dennis J. Turner

“A powerful story of seldom-sung heroines in humanity’s darkest days and a vivid reminder of the power of conscience.” — Edgardo David Holzman, author of Malena

Throughout the occupied territories, Catholic Sisters were active members of The Nazi Resistance.

Based on letters and documents written by Catholic Sisters during WWII, this book tells the remarkable story of these brave and faithful women.

From running contraband to hiding Jews, from spying for the allies to small acts of sabotage, these courageous women risked their lives to help defeat the Reich.

This is a story that needs to be told.

“an engaging account of World War Two as told through the voice of a fictional Belgian nun… fascinating and valuable.” — Donald Lystra, Author of Season of Water and Ice

“”…a generous recounting of the deeds of marvelous nuns living in the midst of mortal danger. It’s also a great read!” — Father James Heft, Professor of Religion at the University of Southern California

Dennis Turner is the author of many law review articles and a law text book, Steele v. Kitchener Case File. For two years, he also wrote a bi-weekly column for the Dayton Daily News entitled, On the River.

Wednesday, July 8
Excerpt at What Is That Book About

Friday, July 17
Review at A Darn Good Read
Review at Reading is My Remedy

During the Blog Tour, we are giving away a copy of What Did You Do in the War Sister?. To enter, please use the Gleam form below.

– Giveaway ends at 11:59 pm EST on July 17th. You must be 18 or older to enter.
– Paperback giveaway is open to the US only.
– Only one entry per household.
– All giveaway entrants agree to be honest and not cheat the systems; any suspicion of fraud will be decided upon by blog/site owner and the sponsor, and entrants may be disqualified at our discretion.
– The winner has 48 hours to claim prize or a new winner is chosen.

What Did you Do in the War Sister 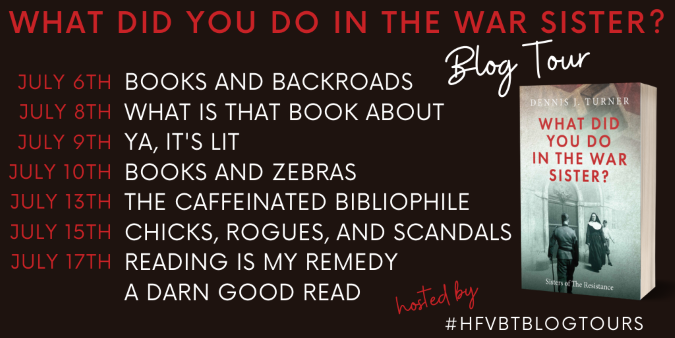 One response to “Dennis J. Turner on Blog tour for What Did You Do In The War, Sister? July 6-17”