Abigail Wilson on Blog Tour for The Vanishing at Loxby Manor, January 19-February 5

The Vanishing at Loxby Manor
by Abigail Wilson

A story of second chances and secrets, this mysterious Regency romance will transport you to 19th-century England as one young lady reunites with her childhood love to find his missing sister.

Her friend is missing.

After five years abroad, Charity Halliwell finally returns to Loxby Manor, the home of dear friends—and her lost love. No longer a young girl, she is now haunted by a painful secret and the demise of her dreams. Instead of the healing and happiness she hopes to find, she encounters a darkness lurking in the shadows of the once-familiar house. When her friend, Seline, disappears the very night of her arrival, Charity is determined to uncover the truth.

Her only hope is the man who broke her heart.

Branded a coward, Piers Cavanaugh has lived the last five years as an outcast far from his family home. When his sister presumably elopes with a stable hand, Piers joins forces with an unlikely partner—the one woman he thought he’d never see again. Together they launch an investigation that leads to strange nightly meetings in the ruins of an old abbey and disturbing whispers of a secret organization. The more they learn, the more desperate the situation becomes.

The house seems determined to keep its secrets.

As they struggle to piece together the clues, Charity and Piers also endeavor to rebuild their friendship. One cryptic letter changed everything between them. To find happiness they will have to overcome the grief and shame keeping them apart. But first they must discover why Seline vanished and confront the growing fear that she may never return.

Settle in, because once you start The Vanishing at Loxby Manor, you won’t be able to put it down.

Praise for The Vanishing at Loxby Manor

“Vanishing at Loxby Manor cleverly combines Regency romance with Gothic intrigue, and the result is a suspenseful, thoroughly entertaining read. Charming and lovely.”—Tasha Alexander, New York Times bestselling author of In the Shadow of Vesuvius

“Like each of Wilson’s novels, The Vanishing at Loxby Manor drew me in from the start and didn’t let go. From the heartfelt characters to the twists that kept me guessing, I relished each turn of the page. Wilson is a master at historical mystery, and I cannot wait for her next story.”—Lindsay Harrel, author of The Joy of Falling

“Abigail Wilson’s latest Gothic romance hits the notes readers have come to expect from her talented pen: romance, shadows and intrigue and a brilliantly executed atmosphere. She is a master at her craft and a rare stand-out in a popular genre.”—Rachel McMillan, author of The London Restoration

“Weaving a shadow of mystery among the gilded countryside of Regency England, Wilson’s tale of love lost, buried shame, and secret societies is a delicious blend of romance and intrigue. Splash in gorgeous historical Regency details, and murder brewing around every stone, and readers will be burning through the pages until the riveting end.”—J’nell Ciesielski, author of The Socialite

“A gothic romance that is filled with great characters and a mystery that unfolds chapter by chapter. A perfect blend of mystery, family relationships, lost years, and star-crossed love. Be warned, you won’t be able to walk away from these characters.”—Cara Putman, award-winning author of Flight Risk

Friday, January 29
Review at Heidi Reads
Review at View from the Birdhouse

Wednesday, February 3
Review at Passages to the Past

Enter to win a copy of The Vanishing at Loxby Manor by Abigail Wilson! Five copies are up for grabs! 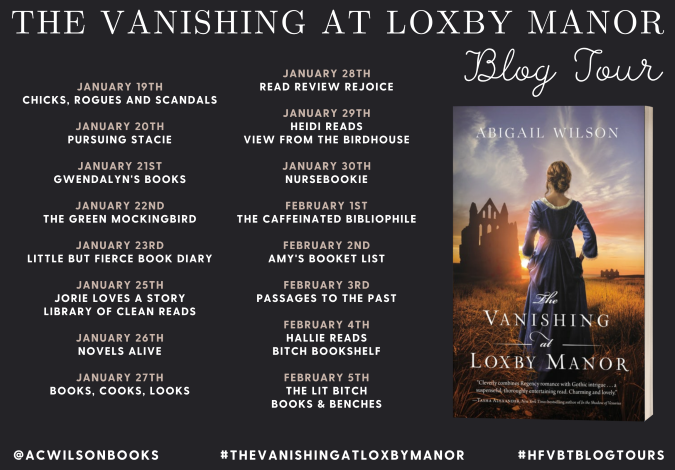 Abigail Wilson on Blog Tour for Masquerade at Middlecrest Abbey, May 26-June 5

In this new Regency romance, Elizabeth knows she must protect her heart from the charm of her new husband, Lord Torrington. She is not, however, prepared to protect her life.

When the widowed Lord Torrington agreed to spy for the crown, he never planned to impersonate a highwayman, let alone rob the wrong carriage. Stranded on the road with an unconscious young woman, he is forced to propose marriage to protect his identity and her reputation, as well as his dangerous mission.

Trapped not only by her duty to her country but also by her limited options as an unwed mother, Miss Elizabeth Cantrell and her infant son are whisked away to Middlecrest Abbey by none other than the elder brother of her son’s absent father. There she is met by Torrington’s beautiful grown daughters, a vicious murderer, and an urgent hunt for the missing intelligence that could turn the war with France. Meanwhile she must convince everyone that her marriage is a genuine love match if her new husband has any hope of uncovering the enemy.

Determined to keep her son’s true identity a secret, Elizabeth will need to remain one step ahead of her fragile heart, her uncertain future, and the relentless fiend bent on her new family’s ruin.

Tuesday, May 26
Review at Bitch Bookshelf
Review at The Green Mockingbird

Wednesday, May 27
Review at Historical Fiction with Spirit

Thursday, May 28
Review at Gwendalyn’s Books

Saturday, May 30
Feature at Journey in Bookland
Feature at What Is That Book About

Monday, June 1
Review at Probably at the Library
Excerpt at Jorie Loves A Story

Tuesday, June 2
Feature at I’m All About Books
Feature at Just One More Chapter

Thursday, June 4
Review at Jessica Belmont
Review at A Chick Who Reads

Friday, June 5
Review at View from the Birdhouse
Review at Foals, Fiction and Filigree

During the Blog Tour, we are giving away 5 paperback copies of Masquerade at Middlecrest Abbey! To enter, please use the Gleam form below.

– Giveaway ends at 11:59 pm EST on June 5th. You must be 18 or older to enter.
– Paperback giveaway is open to the US only.
– Only one entry per household.
– All giveaway entrants agree to be honest and not cheat the systems; any suspicion of fraud will be decided upon by blog/site owner and the sponsor, and entrants may be disqualified at our discretion.
– The winner has 48 hours to claim prize or a new winner is chosen. 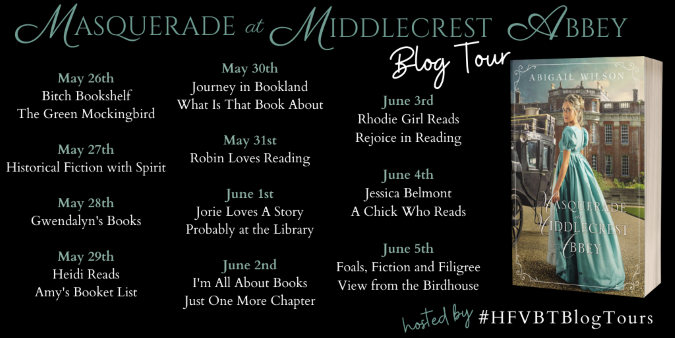