The Last King
by M.J. Porter

They sent three hundred warriors to kill one man. It wasn’t enough.

Mercia lies broken but not beaten, her alliance with Wessex in tatters.

Coelwulf, a fierce and bloody warrior, hears whispers that Mercia has been betrayed from his home in the west. He fears no man, especially not the Vikings sent to hunt him down.

To discover the truth of the rumours he hears, Coelwulf must travel to the heart of Mercia, and what he finds there will determine the fate of Mercia, as well as his own. 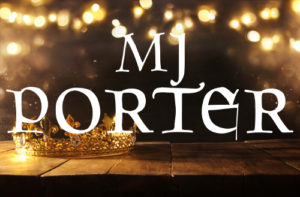 I’m an author of fantasy (Viking age/dragon-themed) and historical fiction (Early English, Vikings and the British Isles as a whole before the Norman Conquest). I was born in the old Mercian kingdom at some point since 1066. Raised in the shadow of a strange little building, told from a very young age that it housed the bones of long-dead Kings of Mercia and that our garden was littered with old pieces of pottery from a long-ago battle, it’s little wonder that my curiosity in Early England ran riot. I can only blame my parents!

I write A LOT. You’ve been warned!

Not sure where to start your journey through Early England? Here are some pointers.

If you like action-adventure, with a heavy dose of violence, foul language and good old camaraderie – The Ninth Century series is for you, starting with The Last King, or The Seventh Century, starting with Pagan Warrior, has a little more politics to go with the set-piece battles.

If you like stories about the forgotten women of history, then the Tenth Century series, starting with The Lady of Mercia’s Daughter, is a good place to begin. Or, The First Queen of England, with a little more romance.

If you’re interested in the last century of Early England (before 1066) then The Earls of Mercia series is for you.

Saturday, January 16
Excerpt at Passages to the Past

Tuesday, January 19
Feature at Impressions In Ink
Excerpt at Madwoman in the Attic

Thursday, January 21
Review at Books and Zebras
Excerpt at Chicks, Rogues and Scandals

Enter to win a copy of The Last King by M.J. Porter! Two paperbacks are up for grabs!

The giveaway is open to the US only and ends on January 22nd. You must be 18 or older to enter. 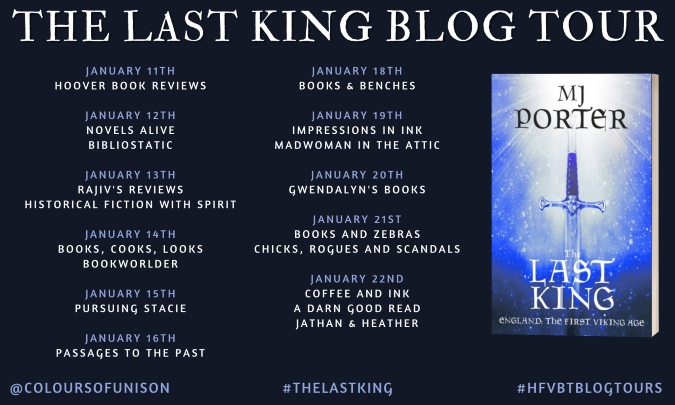