From the author of the “engrossing historical epic” (Booklist) The Scribe of Siena comes Anticipation, a thrilling tale set in the crumbling city of Mystras, Greece, in which a scientist’s vacation with her young son quickly turns into a fight for their lives after they cross paths with a man out of time.

After the death of her beloved husband and becoming a single parent to her nine-year-old son Alexander, overworked scientist Helen desperately needs an escape. So when Alexander proposes a trip to Greece—somewhere he’s always dreamed of visiting—Helen quickly agrees.

After spending several days exploring the tourist-filled streets, they stumble upon the ancient city of Mystras and are instantly drawn to it. Its only resident is Elias, a mysterious tour guide living on the city’s edges…both physically and temporally.

In 1237, Elias’s mother promised his eternal service to the Profitis Ilias in Mystras in exchange for surviving a terrible illness. But during his 800 years of labor, he’s had one common enemy: the noble Lusignan family. The Lusignan line is cursed by a deadly disease that worsens with each generation, and a prophecy hints that Elias’s blood is their only hope for a cure. He has managed to survive throughout the centuries, but the line has dwindled down to the last Lusignan and he is desperate to avert his family’s destiny.

When Elias runs into Helen, he meets his match for the first time—but he unwittingly puts both her and her young son in danger as a result. With time running out and an enemy after them, Elias and Helen are forced to choose between the city they love, and each other.

Blending the historical romance of Diana Gabaldon, the rich detail of Philippa Gregory’s novels, and Dan Brown’s fast-paced suspense, Anticipation is a thrilling and satisfying read like no other.

Pick up Anticipation in eBook for only $1.99 thru April 30th! 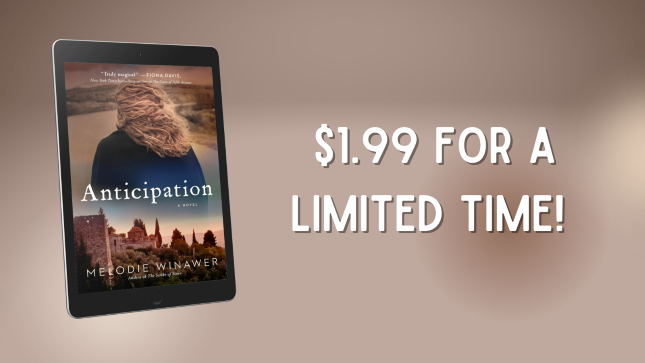 “Winawer (The Scribe of Siena) enthralls with this unique combination of history, romance, and the supernatural…Readers will be riveted from the first page.”—Publishers Weekly (starred review and November Pick of the Week)

“A sweeping saga spanning multiple centuries, Anticipation enthralled me with its scope. Yet Winawer’s gift as a writer also shines brightly in the small moments, like the shared joy between a mother and a child, or the meditations on loss of a grieving widow. Truly magical.”—Fiona Davis, New York Times bestselling author of The Lions of Fifth Avenue

“An epic historical novel that combines science, romance, and suspense.”—BuzzFeed

“Melodie Winawer’s Anticipation is a compelling novel that weaves fantasy, philosophy, science, medicine, romance, and madness into a tapestry of intrigue and mystery. And, fittingly for a physician, Winawer ultimately writes a story of healing and hope. I loved every word and did not want it to end.”—Robin Oliveira, bestselling author of My Name is Mary Sutter and Winter Sisters

Melodie Winawer is the author of THE SCRIBE OF SIENA (2017), which was praised by Publisher’s Weekly, Library Journal, Kirkus Reviews, Bustle, and Real Simple, and was declared a “Must Read Book” by the New York Post. SCRIBE has been translated into German, Czech, Polish, and Norwegian. Winawer is also the author of the recently published ANTICIPATION (November 2021), which was a starred review Publisher’s weekly “Pick of the Week”, called one of the “Best books released in November” and “Best Historical Fiction Fall 2021” by BuzzFeed, and is now a Target Recommends Pick. Melodie is also a contributor to WE ALL FALL DOWN; STORIES OF PLAGUE AND RESILIENCE, an anthology of short stories by nine historical fiction writers. A physician-scientist and associate professor of neurology at Columbia University, Melodie has published over fifty scientific articles. To find the energy to write, she relies on unflagging enthusiasm and green tea. Melodie lives with her spouse and their three children in both New York City and Vermont.

Saturday, April 16
Passages to the Past

Sunday, April 24
Reading is My Remedy