She thought she’d lost everything . . .

After spending months traveling the harsh, unforgiving Mesopotamian desert, Jayden reunites with a broken, injured Kadesh. Although everyone was convinced the violent and unpredictable Horeb, Jayden’s betrothed, killed the handsome prince, Jayden knew in her heart that her love was alive and safe. But their reunion is short-lived, as they learn Horeb is on their trail and determined to take back the girl he has claimed. Soon, the two star-crossed lovers are on the run toward Sariba, Kadesh’s homeland, where, as heir to the Kingdom, he plans to make Jayden his princess.

But the trek to Sariba is fraught with heartache and danger. After narrowly escaping being stoned to death for a crime she didn’t commit, and learning that her sister has disappeared, Jayden’s only solace is her love for Kadesh. But even he is keeping secrets from her . . . secrets that will change everything.

This gorgeous and enchanting sequel to Forbidden, is full of love, danger, and heated passion that will leave readers breathless. 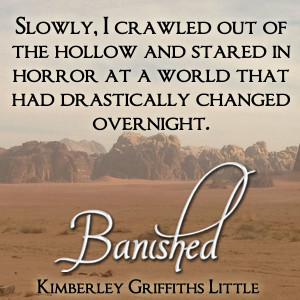 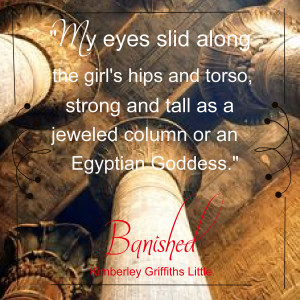 Kimberley Griffiths Little was born in San Francisco, but now lives in New Mexico with her husband and their three sons.

For such award-winning middle grade novels as When the Butterflies Came, The Last Snake Runner, The Healing Spell, and Circle of Secrets, her writing has been praised as “fast-paced and dramatic,” with “characters painted in memorable detail” and “beautifully realized settings.”

Kimberley adores anything old and musty with a secret story to tell and makes way too many cookies while writing.

She’s stayed in the haunted tower room at Borthwick Castle in Scotland; sailed on the Seine in Paris; ridden a camel in Petra, Jordan; shopped the Grand Bazaar in Istanbul; and spent the night in an old Communist hotel in Bulgaria.

Tuesday, February 2
Passages to the Past

Monday, February 8
A Chick Who Reads

Tuesday, February 16
A Dream within a Dream

Wednesday, February 17
What Is That Book About

Friday, February 19
Curling up by the Fire

Monday, February 22
The Life & Times of a Book Addict

To win a $25 Amazon Gift Card & Signed Copies of Forbidden and Banished please enter the giveaway via the GLEAM form below.

– Giveaway ends at 11:59pm EST on March 2nd. You must be 18 or older to enter.
– Giveaway is open internationally.
– Only one entry per household.
– All giveaway entrants agree to be honest and not cheat the systems; any suspect of fraud is decided upon by blog/site owner and the sponsor, and entrants may be disqualified at our discretion
– Winner has 48 hours to claim prize or new winner is chosen.