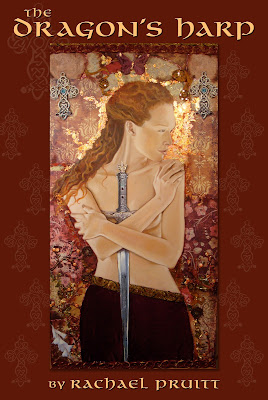 Please join author Rachael Pruitt as she tours the blogosophere for the release of her novel, THE DRAGON’S HARP, the first book in a planned Arthurian historical fantasy series, from March 7th – April 30th!

About The Dragon’s Harp: (Era of Dragon’s: The Lost Tales of Gwenhwyfar, Volume 1)

ENTER THE WORLD OF THE DRAGON’S HARP ARTHURIAN HISTORICAL FANTASY FOR THE 21st CENTURY Before Gwenhwyfar became Queen – before Arthur met Merlin – a tribal Welsh princess met a young Heatherlands Mage. Together, they will create a legend. Inside a mist of beauty and brutality waits the Arthurian legend as you’ve never heard it before. Enter the world of THE DRAGON’S HARP, a realm of blood lust and vengeance, of spellbinding magic from the beginning of time. The realm of Princess Gwenhwyfar: a young girl torn between magic and desire, born with magical powers she can either wield to save her people from destruction – or deny to save her soul. IN AN ERA OF DRAGONS A YOUNG GIRL COMES OF AGE First in a five book series of historical fantasy, Rachael Pruitt’s unique take on a beloved legend reintroduces the mythic characters of Gwenhwyfar, Merlin, and Vortigern against the gritty backdrop of sixth century Wales, where scenes of shape-shifting and heartbreaking romance vie with torture, murder, and battle in a dragon-haunted land. ERA OF DRAGONS: THE LOST TALES OF GWENHWYFAR: BOOK ONE JOURNEY INTO THE WORLD OF THE DRAGON’S HARP YOU WILL NEVER BE THE SAME AGAIN!

My name is Rachael Pruitt and I’m a writer, storyteller, and teacher with a lifelong fascination for Celtic mythology and the Arthurian legend.

My new novel, The Dragon’s Harp, tells the story of the coming of age of the famous Queen Gwenhwyfar (the Welsh spelling for Guinevere) in a dark and frightening time. Merlin is her Uncle and, although she is a tribal Celtic princess who possesses both power and magic, she is in great danger from both the human and supernatural realms.

Dragon’s Harp is just the beginning! I have plans for four more books about Gwenhwyfar and Merlin’s lives. The books are called Era of Dragons: The Lost Tales of Gwenhwyfar.

Here’s what a few of my readers are saying about Dragon’s Harp:

“From the first page I was drawn deep into Pruitt’s beautifully-realized Celtic realm, so vivid I felt as if I’d stepped right into the tale…With shades of The Mists of Avalon, the story is a magical blend of Welsh and Arthurian myth. “All the characters are so vividly rendered they soon lay siege to your heart, and you find yourself loving them, rooting for them, terrified for them, and utterly captivated by them.” -Jules Watson, bestselling author of The White Mare Trilogy, The Swan Maiden, and The Raven Queen

“Rachael Pruitt is a gifted storyteller, able to create vivid, three-dimensional characters in prose that is, by turns, lyrical and powerful. Readers who enjoyed the novels of Parke Godwin, Persia Woolley, Rosemary Sutcliff, and Marion Zimmer Bradley will love The Dragon’s Harp, in which Gwenhwyfar comes of age; best of all there are four more books to come…” -Sharon K. Penman, New York Times Bestselling author of Lionheart, Here Be Dragons, & Time and Chance

“Rachael Pruitt is a natural story teller, and her love of the Guinevere character shines through every page of The Dragon’s Harp. It’s a pleasure to discover her take on this very old story.” -Persia Woolley, author of The Guinevere Trilogy

And, fans, you’ll be glad to know that I’ve already begun the second Gwenhwyfar book: The Dragon’s Breath.

Wednesday, March 14th
Author Guest Post at The Musings of a Book Junkie

Thursday, March 22nd
Review at The Musings of a Book Junkie

Friday, March 23rd
Review at A Chick Who Reads

Thursday, March 29th
Author Guest Post & Giveaway at Passages to the Past

Monday, April 2nd
Review at To Read or Not to Read

Friday, April 6th
Review at Bippity Boppity Book
Author Guest Post at To Read or Not to Read