Katie Crabb on Blog Tour for Sailing by Orion’s Star, May 2-13

East India Company sailor Nicholas Jerome has no patience for pirates, determined to leave his father’s thieving past behind. After a convict and an enslaved woman escape his grasp with the aid of an aristocrat’s mysterious wife, he faces one last chance to save his career. Finding an unexpected home with a new crew, he gains a chosen younger brother in René Delacroix, the son of his wealthy captain and the grandson of Jamaica’s cruel governor.

But there’s a storm brewing in the Delacroix household. For René and his best friend Frantz, the Robin Hood tales about legendary pirate Ajani Danso and his famed female quartermaster are a lifeline amidst the governor’s abuse. Danso robs greedy merchants, frees slaves, and shelters queer sailors, inspiring the downtrodden across the New World.

When death and betrayal shatter the lives they knew, René and Jerome each face a choice: obey, or rebel.

A war for history’s favor begins, and as an uprising against colonialism erupts on the ocean, everyone must choose a story to believe in. 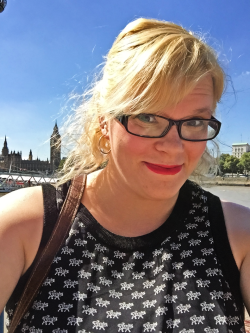 I began writing like most Millennials–in the wide world of fandom! Ever since I’ve loved exploring historical settings, redemption arcs, characters finding resilience in dark times, and what it means to find your family.

The first installment of my golden age of piracy trilogy, Sailing by Orion’s Star, will release on April 26, 2022. Definitely watch this space for updates and information on when the sequels will be released. If you like Les Mis, Black Sails, Pirates of the Caribbean, queer characters having adventures, ensemble casts, and stories about stories, family, finding your way out of abuse, and fighting colonialism these books are for you.