Please join V.E. Ulett as she tours the blogosphere for Captain Blackwell’s Prize from January 21 – February 1. 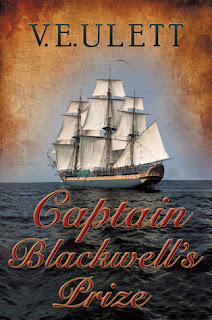 A romantic adventure from the days of wooden ships and iron men, Captain Blackwell’s Prize is a story of honor, duty, social class and the bond of sensual love.

A small, audacious British frigate does battle against a large but ungainly Spanish ship. British Captain James Blackwell intercepts the Spanish La Trinidad, outmaneuvers and outguns the treasure ship and boards her. Fighting alongside the Spanish captain, sword in hand, is a beautiful woman. The battle is quickly over. The Spanish captain is killed in the fray and his ship damaged beyond repair. Its survivors and treasure are taken aboard the British ship, Inconstant.

Captain Blackwell’s Prize features sword fights and sea battles alongside the manners, ideas, and prejudices of men and women from the time of Nelson and Napoleon.

“… a satisfying page-turner. Ulett’s characters are as convincing as her naval action is credible.”  – Julian Mackrell, Historic Naval Fiction

“a fine story … Highly recommended for those who enjoy a romantic tale with a little action included as well.”  – Jeff Westerhoff, Historical Novels Review

A long time resident of California, V.E. Ulett is an avid reader as well as writer of historical fiction. V.E. is a member of the National Books Critics Circle and an active member and reviewer for the Historical Novel Society. Eighteenth and nineteenth century journals and letters inspired the writing of CAPTAIN BLACKWELL’S PRIZE. The sequel takes Captain Blackwell and Mercedes to the far side of the world, on a new personal, and cultural adventure.

Monday, January 21
Review at Oh, for the Hook of a Book!

Wednesday, January 23
Author Interview at Historical Boys
Giveaway at Passages to the Past

Monday, January 28
Review at Confessions of an Avid Reader

Friday, February 1
Review at The Musings of a Book Junkie