Please join author Sandra Byrd on the virtual book tour for her novel, To Die For: A Novel of Anne Boleyn! 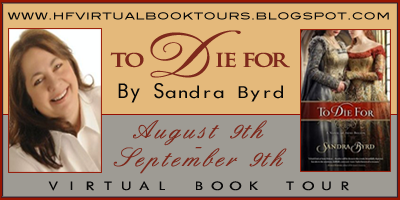 Friday, August 12th
Review & Giveaway at Peeking Between the Pages

Tuesday, August 16th
Review & Giveaway at One Book Shy of a Full Shelf

Thursday, August 18th
Review at A Chick Who Reads
Review & Giveaway at Reviews by Molly

Wednesday, August 24th
Author Interview & Giveaway at All Things Historical Fiction
Book Highlight & Giveaway at Passages to the Past 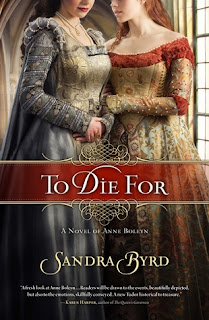 To Die For, is the story of Meg Wyatt, pledged forever as the best friend to Anne Boleyn since their childhoods on neighboring manors in Kent. When Anne’s star begins to ascend, of course she takes her best friend Meg along for the ride. Life in the court of Henry VIII is thrilling at first, but as Anne’s favor rises and falls, so does Meg’s. And though she’s pledged her loyalty to Anne no matter what the test, Meg just might lose her greatest love—and her own life—because of it.

Meg’s childhood flirtation with a boy on a neighboring estate turns to true love early on. When he is called to follow the Lord and be a priest she turns her back on both the man and his God. Slowly, though, both woo her back through the heady times of the English reformation. In the midst of it, Meg finds her place in history, her own calling to the Lord that she must follow, too, with consequences of her own. Each character in the book is tested to figure out what love really means, and what, in this life, is worth dying for.

Though much of Meg’s story is fictionalized, it is drawn from known facts. The Wyatt family and the Boleyn family were neighbors and friends, and perhaps even distant cousins. Meg’s brother, Thomas Wyatt, wooed Anne Boleyn and ultimately came very close to the axe blade for it. Two Wyatt sisters attended Anne at her death, and at her death, she gave one of them her jeweled prayer book—Meg.

PRAISE FOR TO DIE FOR: A NOVEL OF ANNE BOLEYN

“In To Die For, Sandra Byrd gifts the reader with a fresh look at Anne Boleyn through the eyes of her lifelong friend Meg Wyatt. But Meg commands her own interest and respect in the Tudor world of triumph and tragedy. Readers will be drawn to the events, beautifully depicted, but also to the emotions, skillfully conveyed. A new Tudor historical to treasure.”

“In this moving story of a friendship that survives a queen’s rise and fall, Sandra Byrd reaches beyond the familiar stereotypes to give us the story of two remarkable women: Anne Boleyn and Meg Wyatt. A refreshingly three-dimensional Anne and a Meg of courage and integrity make this novel a must for your Tudor library.”

—Susan Higginbotham, author of The Queen of Last Hopes

“Ms. Byrd shows a wonderful sense of time and place in her novel, To Die For. Her characters and her story are drawn with precision. The new life she breathes into well-worn notables like Anne Boleyn and Henry VIII, as seen through her character, Meg, is simply captivating.”

“Most readers of Tudor historicals think they know Queen Anne Boleyn. They’ll meet a very different Anne in Sandra Byrd’s wonderfully told To Die For. Anne’s life-long friend Meg Wyatt tells the tale of Anne’s rise from lady-in-waiting to the arms of King Henry VIII and the throne of England until her tragic fall. Meg, who rises and falls with Anne, seeks her own lost love and faith. Anne’s influence during the English Reformation is an integral and refreshing part of this story, one that Byrd tells with authority, adding a new and honest dimension to Anne’s life and death . . . A novel to savor and return to.”

—Jeane Westin, author of His Last Letter: Elizabeth I and the Earl of Leicester 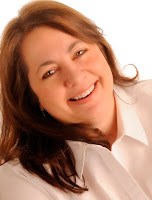 After earning her first rejection at the age of thirteen, bestselling author Sandra Byrd persevered and has now published more than three dozen books. Her adult fiction debut, Let Them Eat Cake, was widely acclaimed, and was followed by two more books in the series. Her most recent 4-book young adult fiction series is London Confidential. Publishing her Tudor Series, beginning with Book 1, To Die For: A Novel of Anne Boleyn, is a lifelong dream come true.A former textbook acquisitions editor, Sandra is also an accomplished non-fiction writer and author. Her articles have appeared in numerous publications and periodicals. Sandra is also passionate about helping new writers develop their talent and their work toward traditional or self publication. As such, she has mentored hundreds of new writers and continues to coach dozens to success each year.Sandra resides in Washington State with her husband Michael, a chaplain, their two children, and a circus dog named Brie.