“Welcome to the Brennenbach of Midnight! The Curse Hours have begun.”

When ten-year-old David Saidel’s parents are murdered, he is sent to live with his grandfather in the anti-Semitic village of Brennenbach. Miserable and lonely, David finds solace in his kindly Grandpa Ernst, who has one strict rule: never go out after midnight.

When David breaks curfew to search for his missing dog, he discovers why Ernst is so serious about his curfew: Brennenbach is cursed. When midnight strikes, the town is thrown back to 1943, the height of Hitler’s reign.

The Nazi ghosts that infest Brennenbach are just as dangerous as they were in life. They’re hunting for David, thinking he is the last member of a family they’ve been ordered to destroy.

Through the help of a little girl named Maria Rahm, David sets out to end the Curse before it claims more victims. 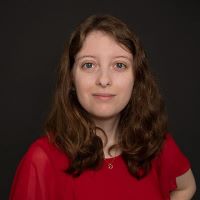 Elyse Hoffman is an award-winning author who strives to tell historical tales with new twists. Having studied WWII since the age of thirteen and with interests in fantasy and Jewish folklore, she loves to combine them in her writing. Elyse started writing novels at fourteen and finished her first historical fiction work at fifteen. She has published eight books: five in a series called The Barracks of the Holocaust, and three novels, including The Book of Uriel, Where David Threw Stones, and Fracture. In her spare time, she loves to read, work on pretty keyboards, and hang out with her co-authors – her Goldendoodle Ari and her ex-feral cat, Echo.